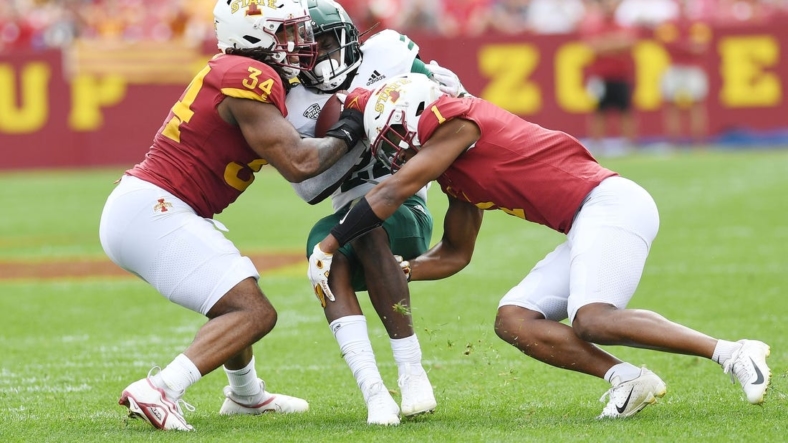 Hunter Dekkers threw for three touchdowns and ran for another as Iowa State earned its first 3-0 start in a decade with a 43-10 victory over visiting Ohio on Saturday in Ames, Iowa.

Dekkers went 28-for-36 passing for 268 yards and no interceptions, while Xavier Hutchinson had nine receptions for 93 yards and a touchdown and Sean Shaw added five catches for 54 yards and a score.

Jirehl Brock had 76 yards on seven carries and Deon Silas added 58 yards and a touchdown on 10 carries to power the ground game.

Kurtis Rourke went 20-for-33 passing for 194 yards with a touchdown and two interceptions for the Bobcats (1-2). Nolan McCormick rushed for 43 yards on seven carries and had six receptions for 19 yards.

The Cyclones pushed the lead to 17-0 on Jace Gilbert’s 19-yard field goal on the first play of the second quarter before putting the game away in the next two minutes.

Iowa State got the ball back on Ohio’s first play of its ensuing possession when Anthony Johnson intercepted Rourke on the Cyclones’ 49-yard line. Five plays later, Silas scored on a three-yard run for a 24-0 lead with 13:07 left in the first half.

Ohio cut the deficit to 24-3 on Nathanial Vakos’ 45-yard field goal with 3:35 left in the half. But Dekkers’ 15-yard scoring strike to Shaw gave the Cyclones a 30-3 lead at the half after Gilbert’s extra-point was blocked by Rayyan Buell.

Gilbert’s field goals from 21 and 39 yards in the fourth quarter capped the scoring.
The Cyclones are off to their best start since opening the 2012 season 3-0 en route to finishing 6-7.