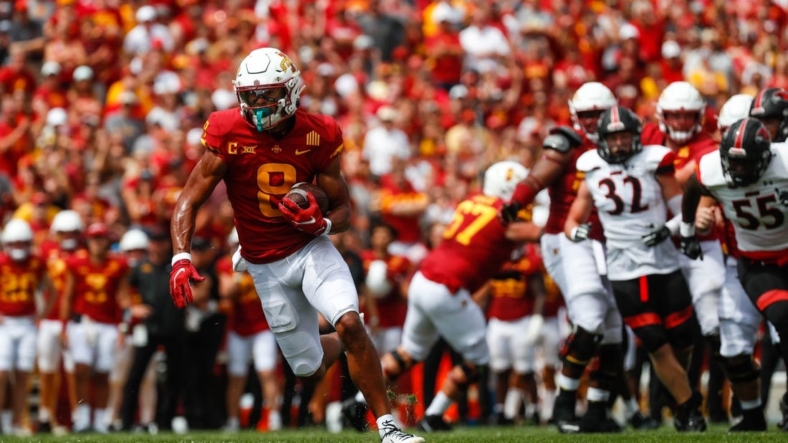 Hunter Dekkers threw for four touchdowns — three in the first half to Xavier Hutchinson — as Iowa State opened the season by beating visiting Southeast Missouri State 42-10 on Saturday afternoon in Ames, Iowa.

Dekkers was 25-for-31 passing for 293 yards with one interception. Hutchinson compiled 128 receiving yards on eight receptions.

Running back Jirehl Brock gained 104 yards on 16 carries with a touchdown.

The Dekkers-to-Hutchinson scoring plays went for 33, 33 and 8 yards, all within a 10-minute span.

Southeast Missouri State quarterback Paxton DeLaurent, a transfer from NAIA program Central Methodist, threw for 222 yards on 19-for-38 passing with a touchdown and an interception. He also was the team’s top rusher with 74 yards on 12 carries, though the Redhawks managed just 98 yards on the ground.

Trailing 21-0, the Redhawks moved into scoring position late in the first half, but DC Pippin’s 41-yard field goal attempt was blocked.

Still, Southeast Missouri State racked up 10 points in the last two minutes of the first half to pull within 21-10 by the break. DeLaurent’s 11-yard pass to Damoriea Vick gave the Redhawks their first points and then a field goal followed the Dekkers interception.

Dekkers threw 9 yards to DeShawn Hanika for Iowa State’s first points of the second half and increasing the lead to 28-10.

The Cyclones added fourth-quarter touchdowns on 1-yard runs from Brock and Deon Silas.

The first four possessions in the second half for Southeast Missouri State ended in punts.

Iowa State looked in control by midway through the second quarter when it posted a 90-yard drive covering 11 plays that concluded with the third touchdown reception for Hutchinson.

Southeast Missouri State was hurt by 100 yards worth of penalties on nine infractions.

It was the first meeting between the teams. Southeast Missouri State dropped to 0-3 all-time against Big 12 opponents.