A line of Seminole fans forms outside the Moore Athletic Center as they wait to pay their respects to the Bowden family Friday, Aug. 13, 2021. Bowden Fsu Lying In Repose155

Hundreds of mourners paid their respects to Bobby Bowden on Friday, five days after the legendary Florida State coach died of pancreatic cancer at age 91.

Former Florida State coaches and players were among those who convened in Tallahassee, where Bowden guided the Seminoles for 34 seasons. There was a ceremony for Bowden on Friday morning at the state capitol. In the afternoon, Bowden lay in repose at the Seminoles’ football facility.

“It was a heck of a lot tougher walking in there, seeing him lying there than I ever thought it was going to be,” former Florida State quarterback Chris Weinke, who won the Heisman Trophy and national championship in 1999, said according to ESPN.com. “Very emotional; to me it should be a celebration of what this guy accomplished in 91 years and the lives he affected in such a positive way.” 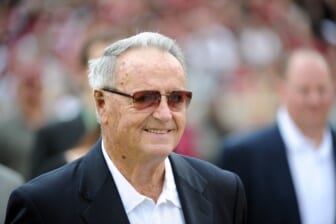 Bowden’s memorial will continue Saturday with a public service at Florida State’s Tucker Civic Center and will conclude Sunday with a public viewing at Samford University and then a private burial service in Trussville, Ala.