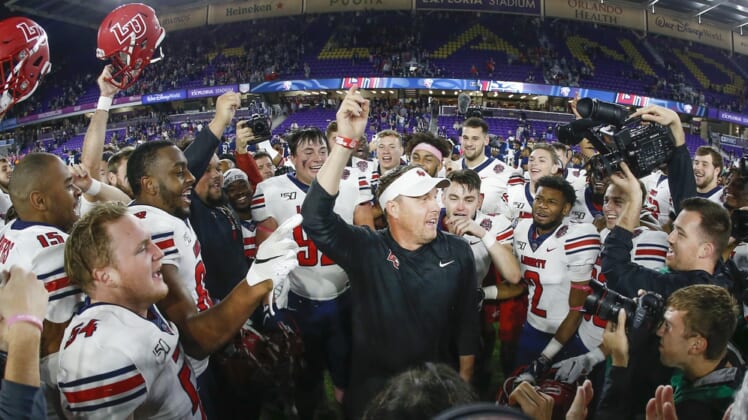 The No. 15 Rebels (6-2) entertain the Flames – led by the ex-Ole Miss coach — in a non-conference game while attempting to regain their footing after a loss against Auburn.

An Oxford, Miss., native, the third-year coach at Liberty (7-2) will return to his hometown and former school after he resigned in disgrace in July of 2017.

Ole Miss was punished after its staff committed numerous recruiting violations under Freeze, while the coach’s issues stemmed from calls he made on a school-issued cell phone to escort services and a pattern of personal misconduct.

Freeze went 39-25 in his five seasons at Ole Miss, including two big upsets of Alabama and a No. 3 ranking – its highest since 1964.

On the other side, Rebels coach Lane Kiffin is trying to regroup from Saturday’s 31-20 defeat at the hands of then-No. 18 Auburn.

Corral, who was 21-of-37 for 289 yards and an interception, had his consecutive streak of 19 games with a passing TD come to an end. He rushed for 45 yards and a score on 10 carries.

“I didn’t feel like we had great energy,” Kiffin said Monday. “We had some very valuable offensive players not playing. We did not play well on offense, especially in critical situations.”

As it was against then-No. 1 Alabama in a 42-21 loss on Oct. 2, those key moments were on four fourth-down conversions, with the Rebels successful on just one.

All three failures occurred inside the Auburn 25 with the Rebels trailing in a close one.

“In the two games where we’ve struggled on our fourth-down conversions, those are a big deal,” Kiffin explained.

Corral was named one of 15 semifinalists Monday for the 85th Maxwell Award for the Collegiate Player of the Year, but Kiffin said his team leader did not do anything in practice because of Saturday’s first-quarter ankle injury.

“It looked really bad when it happened – like season-ending, broken,” Kiffin said. “That’s how he felt it was, but it wasn’t.”

Kiffin will also have to concern himself with another quarterback — Liberty’s Malik Willis.

In his second season leading the FBS independent Flames, the 2019 Auburn transfer has connected on 140-of-210 pass attempts for 1,986 yards with 21 TDs and six interceptions. He has tallied nine rushing TDs.

The Atlanta junior hurt his left foot against North Texas, but returned to rally his club from a 12-point deficit in a 35-26 Flames victory.

“Of course, Malik continued to do some things that make you scratch your head at,” said Freeze, who is 25-8 at Liberty. “Man, that’s pretty phenomenal. Just love, love the way he wants to compete and fight.”

Kiffin said the contest is anything but a late-season tune-up before hosting Texas A&M.

“Yeah, I’d like this to be some opponent you’ve never heard of before that didn’t have a first-round draft pick quarterback. Would be nice,” he admitted.