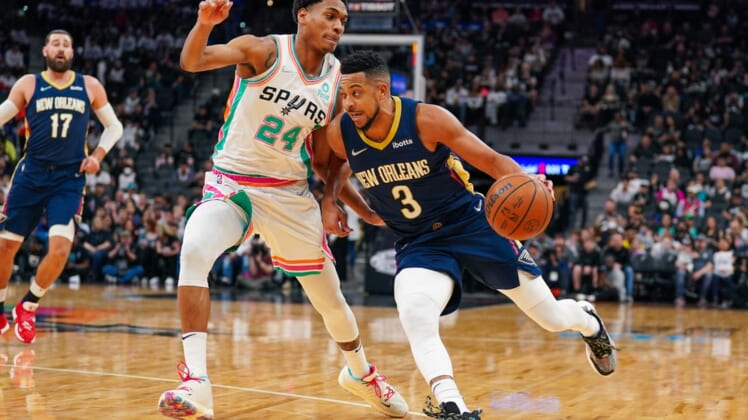 CJ McCollum scored 20 points and Jonas Valanciunas added 16 points and 12 rebounds as the visiting New Orleans Pelicans rode a torrid first quarter to an easy 124-91 win over the San Antonio Spurs on Friday in a key late-season Western Conference game.

The win increased the 10th-place Pelicans’ lead over San Antonio to two and a half games in the race for the final spot in the play-in tournament. The Spurs remained in 11th place, percentage points ahead of Portland, which also lost on Friday.

San Antonio has a game left with New Orleans and three remaining against the Trail Blazers.

Devin Vassell led San Antonio with 18 points while Dejounte Murray had 17 and Keldon Johnson and Joe Wieskamp hit for 11 each in the loss. Lonnie Walker IV left the game for the Spurs late in the first quarter after a collision and did not return because of back spasms.

The Spurs dug themselves a huge hole in the first quarter, missing 17 of their 21 shots and 8 of their 9 3-pointers in falling behind 35-10 after 12 minutes. New Orleans scored 21 straight points in the period as Hayes, with 12 points, outscored San Antonio on his own.

The Pelicans stretched their lead to as many as 32 points in the second quarter before settling for a 64-33 lead at the break. New Orleans got 15 points apiece from Hayes and McCollum in the half, outshot the Spurs 50 percent to 26.1 percent (the lowest first-half shooting percentage for San Antonio this year) and outrebounded San Antonio 35-20.

Vassell had 12 points to pace the Spurs, hitting four of 12 shots San Antonio made in the first half.

New Orleans was up by as many as 40 points in the third quarter as the Spurs could make no headway.

San Antonio coach Gregg Popovich was ejected from the game after two technical fouls with 9:38 to play in the second quarter and the Spurs trailing 39-15. Popovich winked at his players on the way to the locker room.