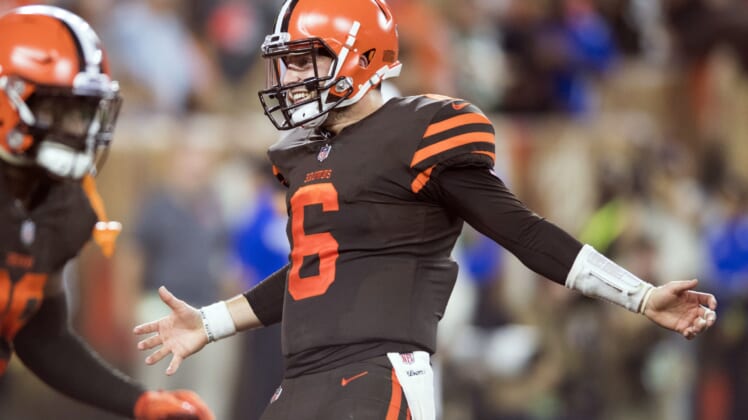 Hue Jackson was not ready to trust Baker Mayfield, but it sounds like that’s all about to change.

Heading into the summer, the No.1 overall pick not only wasn’t given even a shot to compete, but he also didn’t even get a single first-team rep in preseason or training camp with the Cleveland Browns.

This organization and fan base needed hope, but Jackson was determined to have Taylor be the starter and receive all the first-team reps.

Jackson’s confidence in Taylor was not rewarded. The 29-year-old quarterback struggled in his first two starts with missed throws and poor decisions, leading to a 0-1-1 record in winnable games.

A bad situation deteriorated to a nightmare on Thursday Night Football with a miserable first-half performance by Taylor. Late in the second quarter, the veteran’s head slammed into the turf and he suffered a concussion.

Mayfield was called upon to made his NFL debut with Taylor unable to return and the team trailing 14-0 with less than 80 seconds remaining in the half.

Despite not receiving a single snap with the starting offense throughout the summer, Mayfield immediately moved the ball down the field.

He immediately racked up 31 passing yards on his first two attempts, already surpassing Taylor’s passing line on the entire night. The rookie quarterback put the Browns in field-goal range and they went into halftime down 11 points with all the momentum on their side.

The second half was even better for Mayfield as he balled out against an underrated defense. Cleveland’s defense was invigorated in the second half behind an offense that kept them off the field and took pressure off of them.

Cleveland tied the game at the end of the second quarter, in parts thanks to an incredible trick play that resulted in Mayfield catching the two-point conversion to tie it at 14.

Finally, the biggest test came for the rookie. He took the field down by three points with just under nine minutes left in the game. Cleveland’s offense ate up the clock and marched down the field then Carlos Hyde punched it in for the go-ahead touchdown that sent the home crowd into a state of elation.

Two defensive turnovers sealed the game and everyone celebrated the team’s first win in 635 days. Finally, the monkey was off this team’s back. A fan base desperate for hope and excitement finally had their moment.

Jackson exercised caution after the game. In front of cameras waiting to hear him proclaim Mayfield the starter, Jackson announced he would first look at the film to see how the rookie performed.

Everyone watching on Thursday night saw Mayfield was the better quarterback — he injected life into a team that no one else could revive. The tape confirmed what everyone saw, which is that Mayfield made the big plays.

“It was as good as I thought live,” Jackson said on Friday, via Browns.com. “He made some tremendous throws.”

Before a starter is announced, Jackson wants the team to be on board and fully support the decision. Which sounds an awful lot like it’s going to be Mayfield, and that Jackson is being sensitive to the injured Taylor.

Mayfield demonstrated the ability to make everyone better, and quarterbacks who win games also win the locker room.

The rookie out of Oklahoma changes this offense completely. He can get the ball out quickly to Jarvis Landry and allow him to make plays after the catch. He also has the ability to consistently hit Antonio Callaway on the deep ball.

Todd Haley’s offense is made for Mayfield’s playmaking ability. While there will be growing pains along the way, the Browns finally have an offense that can challenge opposing defenses and keep Cleveland’s defense rested.

We knew the Browns have a strong defense, they lead the NFL with 11 turnovers and the ability to dominate in turnover differential can make all the difference in the standings.

Cleveland might be 3-0 with Mayfield if he started the season, but even at 1-1-1, there is a lot of reason for optimism. While there are some tough opponents on the schedule, matchups against the likes of the Oakland Raiders, Baltimore Ravens, Pittsburgh Steelers and Houston Texans are winnable.

If the Browns can pull off an upset win along the way and beat the opponents they have the talent advantage over, Mayfield could lead this team to six or seven wins.

After winning just two games in Jackson’s first two seasons, that will represent a massive turnaround and inject excitement into the entire city of Cleveland. It could also keep Jackson employed as head coach with hype surrounding what the team could do in 2019.

A coach who everyone expected to be the first cut down, could now see his job saved by the rookie who he refused to trust. At the very least, the city of Cleveland now has something to celebrate and a team to be excited about.