Hue Jackson has not spoken to or met Johnny Manziel 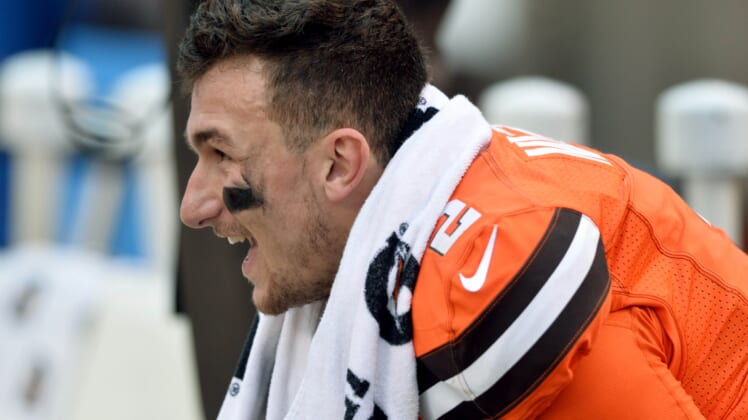 Considering  Johnny Manziel is kind of hard to find at times while running around in a ridiculous disguise, it is not surprising new Cleveland Browns head coach Hue Jackson hasn’t caught up with the quarterback.

While on with Dustin Fox of 92.3 The Fan (h/t Daryl Ruiter of CBS Cleveland), Jackson said he’s neither met nor spoken with Manziel. Per the report, Jackson has been in touch with many other Browns players either by phone or in person.

Jackson also said he hasn’t reviewed the latest video posts of Manziel partying and drinking in a Dallas bar, either.

“I haven’t watched it, to be honest. It is the offseason and players are going to, I would hope that players are going to a great job of representing themselves and our organization and our team in a positive light. And that’s what we want, and if guys don’t everybody understands and recognizes there’s consequences for everything that you do.”

Unfortunately for Manziel, he treated the 2015 campaign as if it were the offseason. Since last September, Manziel has been spotted in various videos and photos partying and imbibing. He also had the publicized altercation with his girlfriend, when she accused him of hurting her during an argument in a vehicle.

Manziel was also reportedly spotted in Las Vegas wearing a cheesy disguise the night before Cleveland’s final game. To make matters worse, Manziel missed his concussion protocol meeting with the team’s doctor the following morning, which resulted in a fine.

With him apparently not attempting to get in touch with Jackson and the coach not speaking to Manziel personally, all signs would point towards the quarterback being finished in Cleveland.

Perhaps Manziel’s aloofness has made the Browns’ potential decision to rid themselves of him even easier. Then Cleveland can move on and let Manziel potentially become the a throbbing headache for the Dallas Cowboys.