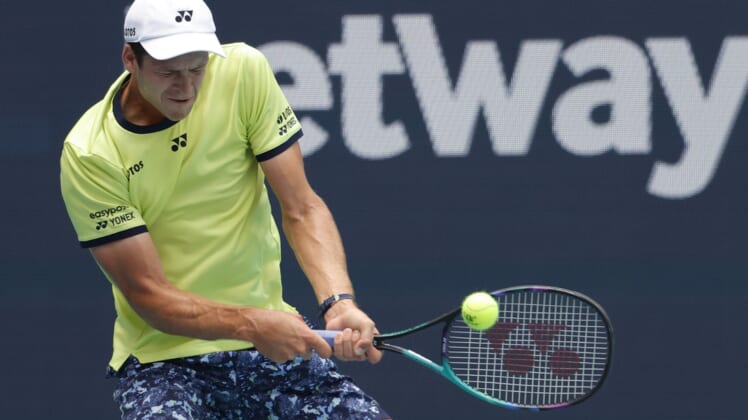 The eighth-seeded Pole, who is the defending champion at Miami, beat Medvedev 7-6 (7), 6-3 in a quarterfinal match. Had Medvedev won, the Russian would have would regained the top rating that he lost to Serbia’s Novak Djokovic earlier this month.

Hurkacz squandered two set points while serving at 5-3 in the first set. He needed three more set points in the tiebreaker before eventually prevailing.

In the second set, Hurkacz never faced a break point, and he converted two of his nine break opportunities.

“I have spent a lot of time in Florida, so I am used to the humidity. I think the conditions were in my favor today, so I tried to use them.”

Medvedev, the reigning U.S. Open champion, has reached just one final this year, when he fell to Rafael Nadal for the Australian Open title.

Alcaraz rallied in the decisive tiebreaker against Kecmanovic after neither player had a break point in the third set. Kecmanovic was up 5-3 in the tiebreaker before losing the last four points.

Alcaraz, 18, is through to the semifinal of an ATP Masters 1000 event for the second time. His best Grand Slam result was a quarterfinal appearance at the U.S. Open last year. Alcaraz owns two career ATP Tour titles, with one of them coming last month in Rio de Janeiro.

“Carlos has been playing some amazing tennis this year, only played good matches I think, so that would be super tough (to beat him),” Hurkacz said.