Raiders Day One Draft Went The Way You Think it Did 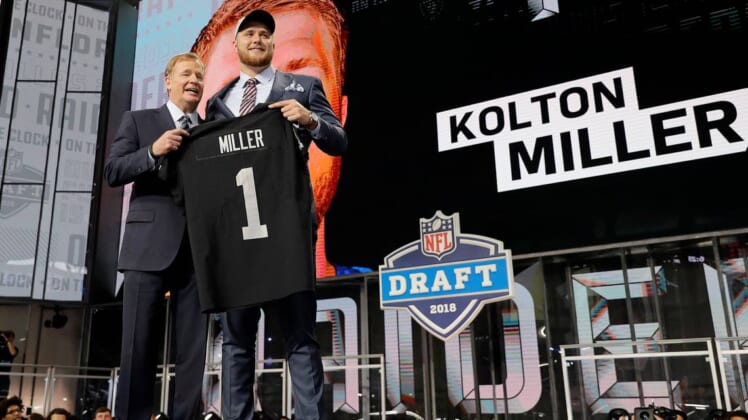 Raider Nation is unlike any other fanbase in sports. The passion runs deep and after a long period of dark times, excitement was building coming into the 2018 draft.

The 2018 Draft kicked off in Dallas tonight and that collective scream of frustration you heard was Raider Nation cursing another first round draft pick that did not please the denizens of fans in silver and black.

The meltdown came fast after the team traded down in the first round from the 10th overall pick to 15. Oakland traded #10 to the Arizona Cardinals so they could grab UCLA quarterback Josh Rosen. That meant fans would have to wait five more picks for the Raiders to make their first round pick.

Then, rumored favorites Tremaine Edmunds and Derwin James were there at #15 and the Raiders opted for UCLA offensive tackle Kolton Miller.

Instantly reaction was negative and the vitriol heavy. Raider Nation did not approve and soon were cursing general manager Reggie McKenzie and coach Jon Gruden. Almost everyone expected the Raiders to address their deficiencies on defense but they opted to bolster their offensive line. You know, the guys who protect the golden arm of Derek Carr.

Still, I couldn’t help but feel for the fans. I was perplexed by the pick. This despite early this morning Silver and Black Today NFL senior writer Hayden Nadolny messaging me it was going to be Miller if talented Notre Dame tackle Mike McGlinchey wasn’t available. He wasn’t, as the curse of the coin toss hit Oakland as the 49ers grabbed him with the ninth overall pick. This team had made up is mind it was going to improve the offensive line.

This is one of the worst Raiders picks and thats saying something. Browns west

When asked why he chose Miller, McKenzie praised the young lineman.

“The fact that he’s a big man that can move his feet,” McKenzie said. “He’s played left tackle and right tackle. He’s been an offensive lineman pretty much his whole life. He understands the game. He’s an excellent athlete who has great potential, so we feel really good about adding him to the Raider roster.”

Miller has the arm length needed to play the position in the NFL and he’s a fleet-footed athlete for a player his size. While we might have been surprised about the pick, he’s much more talented than many folks are giving him credit for.

Still, Raider Nation too to Twitter with anger and disappointment. Yet, as they were smarting on the interwebs,  the Raiders – in my view – saved the day. They traded a third round pick in the 2018 draft for unhappy Pittsburgh Steelers wide receiver Martavis Bryant. Bryant was on the outs in Pittsburgh after being demoted last year. He also had trouble off the field when he was suspended for violating the NFL’s substance abuse policy in 2016.

Despite his turmoil the past few seasons, the addition of Bryant – to play along with Amari Cooper and newly signed Jordy Nelson – should excite fans. Derek Carr now has a stellar receiving corps.

Still, it was what the Raiders didn’t draft that is the talk of Raider Nation. The disappointment over the lack of a defensive game changer is what many are focused on.

Raiders fans will see this first day of the 2018 NFL Draft through whichever lens they choose. Some will decry every inch of it, while others will see the good and wait to pass judgment on Miller until he hits the field.

Oakland still has 11 picks yet to make – or trade. It’s hard to grade what they’ve done just yet.

Still, however you think the Raiders did today is how they did.