How To Watch UFC 277 Live Without Cable: Peña vs. Nunes

Fight fans won’t want to miss this next UFC event featuring a pair of fiery title bouts and other big matchups. 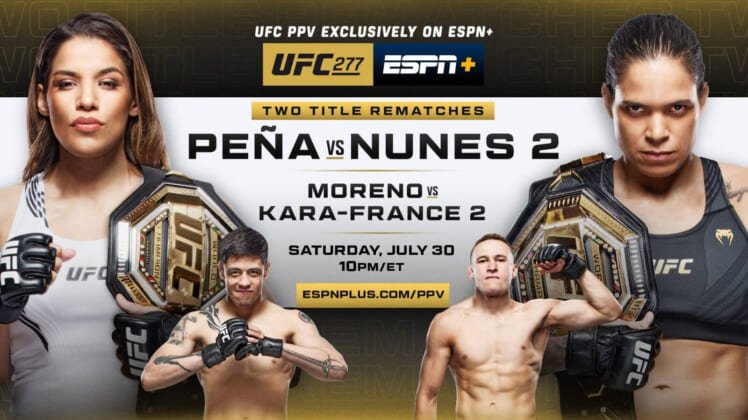 UFC 277 takes place on July 30 at American Airlines Center in Dallas. With 13 fights on a card brimming with some huge names in the mixed martial arts arena, including two highly anticipated title matches, UFC fans are going to want to tune in.

Must-watch bouts on the UFC 277 card include the women’s bantamweight title match between Julianna Peña and Amanda Nunes, two longtime rivals going toe-to-toe for that coveted belt. After Peña stunned Nunes in their title fight in December, both are out to stake their claim at the top of the division.

Also on the UFC 277 main card, Brandon Moreno will take on Kai Kara-France for the interim flyweight title in what promises to be a fierce battle. Kara-France is the underdog but comes in on a three-fight win streak since losing to Moreno in January 2021.

The most anticipated fight on the UFC 277 card is the rematch for the women’s bantamweight title between Amanda Nunes and Julianna Peña. In their last meeting, the Brazilian Nunes suffered a shocking defeat at the hands of Peña, ending her 12-fight win streak and costing her the title.

Nunes is going into UFC 277 hungry to restore her legacy, but Peña also has plenty to prove. The Venezuelan has refuted Nunes’s claims that illness prevented her from performing her best in their last matchup. “They got every excuse in the book for why I won,” Peña told a local media outlet. “My whole premise behind wanting to do the rematch was just to solidify that I am here to stay… The Amanda era is done. It’s the Julianna Peña era now.”

The five UFC 277 main-card fights are available only as a pay-per-view (PPV) event for existing ESPN Plus subscribers for a one-off cost of $74.99.

For UFC fans who don’t want to watch main-card fights, other fights on the UFC 277 schedule are available outside the pay-per-view package via ESPN, ESPN Plus, and UFC Fight Pass.

ESPN Plus is dedicated to sports covering soccer, baseball, hockey, UFC MMA, boxing, golf, football, basketball, and more. Subscribers get access to live events, original studio shows, series, and documentaries that aren’t on other ESPN networks. This includes an on-demand library of content like the “30 for 30” back catalog and game replays, exclusive access to UFC PPV events, and premium articles and fantasy sports tools on ESPN.com.

ESPN Plus costs $6.99 per month or $69.99 per year and is streamable on a wide range of compatible devices, including Apple, Android, and Roku. It doesn’t include access to ESPN live TV channels.

The Disney Bundle includes access to Hulu, Disney Plus, and ESPN Plus for $13.99 per month. This means that in addition to all the features included in ESPN Plus, subscribers also get access to exclusive Disney shows and movies (including Disney, Pixar, Marvel, Star Wars, and National Geographic content) and the Hulu on-demand library, featuring thousands of hit movies, TV shows, and original series.

You can watch content from the Disney Bundle through the Hulu, Disney Plus, or ESPN Plus apps on a wide range of supported devices. To watch UFC 277, subscribers must sign up for the PPV event via ESPN Plus.

Get UFC 277 with the Disney Plus Bundle

Die-hard UFC fans may want to sign up for UFC Fight Pass. For a monthly cost of $9.99 or an annual cost of $95.99, the pass provides access to prelims for PPV events, the entire UFC fight library, exclusive original series and shows, and live martial arts events covering boxing, Muay Thai, submission grappling, kickboxing, and more.

UFC Fight Pass, however, doesn’t show main-card fights live in the U.S. — they’re only accessible through ESPN Plus PPV and are added to the UFC Fight Pass library about one month after they originally air.

To sign up for ESPN Plus via your web browser:

You can also sign up for ESPN Plus via the ESPN app on your mobile, tablet, or TV, or you can subscribe to ESPN Plus as an add-on via Hulu.

To sign up for ESPN Plus via your web browser:

Get UFC 277 with the Disney Plus Bundle

To sign up for UFC Fight Pass via your web browser:

You can also sign up for UFC Fight Pass via the ESPN app on your mobile, tablet, or TV.

*All times are EST.

The most reliable way to watch all fights in the UFC 277 lineup is to subscribe to ESPN Plus and then pay a one-off fee to access the PPV event. Subscribing to ESPN Plus, ESPN, or UFC Fight Pass will give access to some but not all UFC 277 fights.

How can I watch UFC pay-per-view for free?

Legally, it’s not possible to watch UFC PPV fights for free. The UFC holds all rights to their broadcast and streams exclusively through ESPN.

How can I watch UFC fight night?