How to Watch UFC 276: Adesanya vs Cannonier 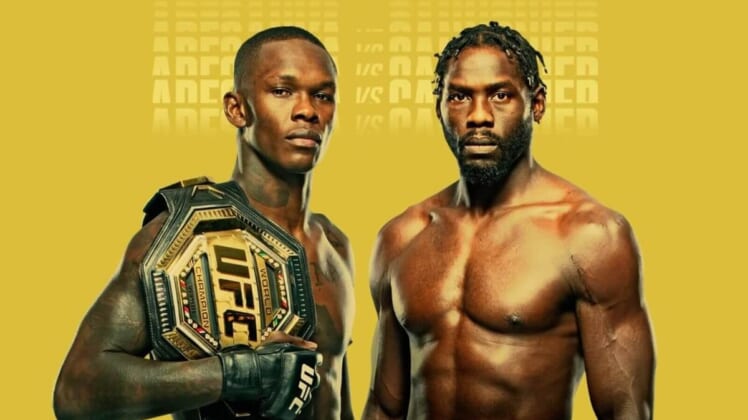 Another highly-anticipated contest sees a rematch between UFC Featherweight Champion Alexander Volkanovski and Max Holloway. The pair first met at UFC 245 in December 2019, with Volkanovski defeating Holloway to take the title. Volkanovski successfully defended his championship against Holloway at UFC 251 in July 2020, winning a controversial split decision. A scheduled third fight at UFC 272 was shelved after Holloway was forced to withdraw due to injury. This is likely their final showdown.

On the women’s side, former women’s bantamweight champion Miesha “Cupcake” Tate will make her flyweight debut against third-ranked Lauren Murphy. If you’re on the hunt for how to watch UFC 276 we’ll detail how, when, and where to tune in to all the fights you won’t want to miss!

If you haven’t yet subscribed to ESPN Plus, here’s a detailed breakdown of the plans and pricing:

ESPN Plus checks all the boxes for UFC fans that want to view combat sports action. The sports streaming service offers UFC PPV and UFC Fight Night events, behind-the-scenes footage, archives, and originals like Detail with Daniel Cormier. A basic ESPN subscription costs $9.99 per month, or you can purchase the annual plan for $99.99 per year to save nearly $20 each year. The streaming service also offers a special discounted bundle for UFC fans: New subscribers can get a one-year membership and one PPV event for just $124.98. This is a steep discount as UFC PPV events typically cost $74.99 per fight.

In addition to UFC coverage, sports fans can access live MLB, NHL, MLS, PGA golf, college football, international soccer, and tennis with an ESPN Plus subscription. Unfortunately, there aren’t any live NFL or NBA games aired, though. Other features include original shows, detailed game recaps and analyses, and the award-winning documentary series “30 for 30” library. Subscribers can also personalize their experience by setting their preferences to follow their favorite leagues, teams, and players.

ESPN Plus is the streaming service for all things sports, but keep in mind that the one downside is that the service doesn’t offer a free trial.

The Disney Bundle, which costs $13.99 per month for the ad-supported plan or $19.99 per month for the ad-free plan, combines the best sports, movies, and shows from three different streaming platforms: Disney Plus, Hulu, and ESPN Plus. Disney Plus is home to major franchises like Marvel, Pixar, Star Wars, National Geographic, and Disney. The streaming service offers original programming, timeless animated classics, children’s programming, musicals, concerts, and blockbuster films. Plus, streaming in 4K and HDR are included. The Disney Bundle’s family-friendly programming, however, means that R-rated titles like “Deadpool” and “Logan” are unavailable for viewing on the platform.

With the Disney Bundle, you’ll also get access to Hulu’s ad-supported or ad-free plan, which offers the more mature content that’s restricted on Disney Plus, as well as unlimited access to thousands of shows and movies, such as “Only Murders in the Building,” “The Kardashians,” “Fire Island,” “Conversations with Friends,” and “Nightmare Alley.”

Last but not least, Disney Bundle subscribers can also benefit from all the ESPN Plus content you can imagine, including Early Prelims and Prelims of UFC 276 and the option to purchase the main PPV event.

There’s no free trial for the Disney Bundle, but if you choose to subscribe, note that you’ll need to log in to each streaming platform separately.

Get UFC 276 PPV Live Stream with the Disney Bundle

Now that you’ve signed up for UFC 276 on ESPN Plus, on its own, or as part of the Disney Plus bundle, it’s time to tune in to watch the loaded lineup on Saturday, July 2, 2022, at the T-Mobile Arena in Las Vegas. Here’s the complete schedule:

*All times are in Eastern Time.

Early Prelims and Prelims are available on ESPN Plus. The main fight is available for purchase via PPV to current ESPN Plus subscribers for $74.99.

How can I watch UFC PPV for free?

UFC PPV can’t be streamed for free. UFC fights are only available for viewing on UFC Fight Pass and the ESPN Plus digital streaming service. Subscribers to these services can purchase individual UFC PPV events.

Can I order UFC without ESPN Plus?

ESPN Plus has exclusive rights to carry UFC PPV events in the United States. Fans will not be able to purchase UFC PPV events via other cable and satellite providers.