How To Watch the Atlanta Falcons Games Live This Season (2022) 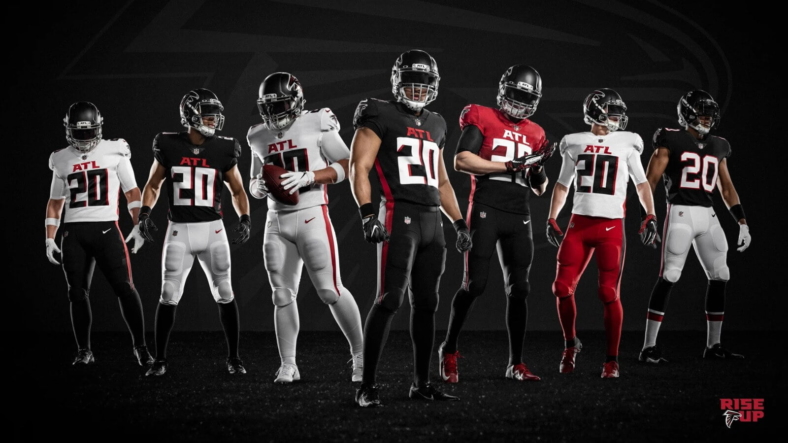 With the Atlanta Falcons ridding their roster of longtime quarterback Matt Ryan, the team is looking to Marcus Mariota as their leader in the huddle. Along with new No. 8 draft pick Drake London, the Atlanta Falcons are hoping to shake things up with some fresh faces throughout the locker room. Be on the lookout for the Falcons to fly high against some tough competition as the season gets underway.

Wondering how you can watch all the Atlanta Falcons games live? You’ve come to the right spot. You can watch nearly all of the Falcons’ 2022-23 season on a live streaming service that offers ESPN, Fox, NBC, CBS, and NFL Network. Let’s take a look at which options are the best for you this season.

Where can you stream almost all of the Atlanta Falcons games?

Crossing the goal line with one of the lowest-priced live sports streaming services on the market, Sling TV knows how to get the job done. With access to any local game showing on FOX or NBC, most viewers will get to watch their favorite team and enjoy Monday Night Football on ESPN.

Starting at just $35 per month, users can choose between the Orange or Blue packages. While you can spend time browsing the channel lists, the Orange & Blue package is the best of both worlds. For just $50 per month, you’ll get access to all channels offered on the Orange package and the Blue package, including ESPN and the NFL Network. And right now you can even get your first month 50% off.

Hulu + Live TV has two plans: an ad-included plan for $69.99 and an ad-free plan for $75.99. Both provide access to the full on-demand library of shows, movies, originals, unlimited DVR, and 75+ live TV channels. The only difference will be whether your content is interrupted by pesky ads or not. You’ll still gain access to ESPN Plus and Disney Plus with either plan, making your non-football watching days equally entertaining. So what are you waiting for, the season to be over? Sign up for Hulu + Live TV today to get started.

No commitments to a streaming service may sound appealing, but when you pair it with DIRECTV STREAM’s offerings, it’s a no-brainer. NFL fans can kick back, relax, and toss on Sunday Football after signing up for one of DIRECTV STREAM’s four packages. Starting at just $69.99 per month for over 75 channels and simultaneous streaming on up to 20 screens, subscribers can easily have every TV in the house streaming the game. And to make things even sweeter, DIRECTV STREAM is offering a five-day free trial, so you can test out the package of your choosing to make sure it’s the right streaming service for you.

FuboTV is one of the most robust sports streaming services, as it offers channels such as beIN Sports, ESPN, ESPN2, FS1, FS2, NBA TV, NBC Sports Network, NFL, and NFL RedZone. With the Ultimate plan, you also gain access to FuboTV’s Sports Plus add-on that allows you to stream different Stadium and PAC-12 Networks. Check out the seven-day free trial to see what FuboTV offers this NFL season.

YouTube TV offers two plans, with one specifically geared toward Spanish-speaking households. The Base Plan will run you just $64.99 and give you access to over 85 live channels. You’ll also be able to watch YouTube Originals during the off-season. The Spanish Plan, on the other hand, costs $34.99 per month and provides access to over 28 Spanish networks, including live sports, telenovelas, shows, and more.

Whichever plan you choose, you’ll receive unlimited DVR storage and six accounts to share with family or friends. For sports fans, we recommend adding the Sports Plus or 4K Plus add-ons to up your viewing experience. Now is the best time to try out add-ons, as YouTube TV is offering $30-$60 off the first three months, depending on your chosen plan.