How to Address Raiders Defense and Make it Better – Now. 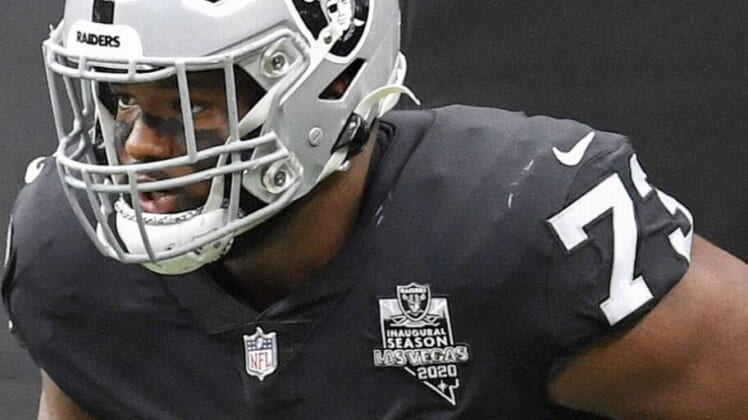 While many fans are focused on Paul Guenther getting fired, there are real ways to start to change the Raiders defense for the better. Here are a few ways to make changes for a better outcome.

Following a 45-20 loss to the Tampa Bay Buccaneers, Las Vegas Raiders head coach Jon Gruden was upset about his team’s defensive performance. He should’ve reached this point long ago. The Raiders defense has allowed the second-most points through Week 7. The offense has to produce at peak levels to outscore opponents in the 30s.

Based on Gruden’s comments during his Monday media presser, he’s not ready to replace defensive coordinator Paul Guenther or look for outside help:

Although Gruden has changed his mind about player personnel decisions before trade deadlines in the past, he’s been loyal to Guenther and his scheme.

In Week 5, the Raiders sacked Kansas City Chiefs quarterback Patrick Mahomes three times and frustrated him inside and outside the pocket through the second half. That Raiders defensive showing likely afforded Guenther an extra lifeline.

The Athletic’s Vic Tafur pulled a quote from Gruden’s presser that suggests we’ll see fine-tuning within the Raiders defense schematics rather than sweeping changes in the coming weeks.

“Who goes inside, who goes outside,” Gruden said. “Who’s on the left side, who’s on the right side. What stunts we call. What blitzes we call. Everything is on the table. …We’re going to play better on defense, I’m determined to make sure we prove that this week.”

Fans would like to see Gruden boot Guenther, but that doesn’t seem likely to happen at the moment. What can the coaching staff do to fix some of its question marks on the Raiders defense? Let’s go through the club’s talent evaluation gaffes and a solution for each issue.

“I’ve been around Geno Atkins a long time in his career,” Guenther said (h/t Levi Damien of Raiders Wire. “Maliek reminds me a lot of Geno Atkins. He might be our best acquisition of the offseason from what I’ve seen. He’s been tremendous.”

This assessment should’ve raised some eyebrows months ago. Although Collins showed potential in four seasons with the Dallas Cowboys, he didn’t ascend on a level close to Atkins. The latter recorded 12.5 sacks in his third term. The former made his biggest impact on the Cowboys pass rush as a rookie with five sacks and 13 quarterback hits. They’re not comparable talents.

The Raiders must come to terms with the fact that they overestimated Collins’ impact on the interior pass rush. Gruden called him the key to the Raiders defense, but the fifth-year veteran has recorded just three quarterback pressures and five tackles in as many games.

Yet, Collins has played 49 percent of the defensive snaps compared to 34 percent for Maurice Hurst, who’s logged six quarterback pressures, a half-sack, 13 tackles with one for a loss.

Although Hurst’s numbers don’t jump off the screen, he’s at least earned more time on the field. With an increased workload, the former Michigan standout could unlock the Raiders’ interior pass rush.

We should’ve known Carl Nassib would take on a backup role behind last year’s No. 4 overall pick in Clelin Ferrell and the team’s 2019 sack leader, Maxx Crosby.

The Raiders signed Nassib to a three-year, $25.25 million contract. He carries a $7.75 million cap hit for the current term and $9.5 million next season, which includes $5.75 million in dead cap, per Spotrac. Strangely, the 27-year-old has played just 31 percent of the defensive snaps.

Even if we discount Week 5, the game in which Nassib suffered a broken big toe, his snap count as a member of the Raiders defense seems like a head-scratcher with a contract that averages a little more than $8 million annually with a decent dead cap hit in the second term.

If Nassib isn’t a good fit, general manager Mike Mayock should attempt to deal him to escape the 2021 dead cap charge. Otherwise, the Raiders have to find a way to use his skill set. He’s a 6’7″, 275-pounder who can set the edge and found a role with the Buccaneers and Cleveland Browns as rotational pass-rusher on about 50 percent of the snaps between the 2016 and 2019 seasons.

Despite his broken toe, Nassib played 54 percent of the defensive snaps against the Buccaneers last week, so we may continue to see his workload trend up as the Raiders tweak their strategy.

When Will Isaiah Johnson Get a Chance?

Once upon a time, Gruden called Isaiah Johnson the steal of the 2019 draft. The Raiders selected him in the fourth round with hopes to develop his skillset after he transitioned from wide receiver to cornerback at Houston.

At 6’2″, 210 pounds, Johnson has the size and the length to cover ground and quickly close passing windows in coverage. Although Gruden boasted about the former Cougar’s potential, we haven’t seen him on the field for extended stretches for the Raiders defense.

During the 2019 preseason, Johnson suffered a facial injury, which landed on him injured reserve. As a rookie, he only appeared in five games and carved out a limited role on special teams.

Johnson’s development took another hit because of the truncated 2020 offseason without a preseason, but the Raiders should at least rotate him in a backup role while Damon Arnette recovers from thumb surgery. At 5’9″, 190 pounds, Nevin Lawson has struggled against bigger pass-catchers on the perimeter.

Through two seasons, Johnson has played just 44 defensive snaps. Clearly, he’s not ready to handle a full-time role. However, the Raiders defense can use him in controlled situations against athletic wideouts on the perimeter.

Because of his size, background as a wide receiver and ball-tracking skills, Johnson may match up favorably against pass-catchers who use their stature as an advantage over smaller cornerbacks.

According to Pro Football Focus, Johnson has lined up out wide for 21 snaps this season. With Arnette on the sideline, this is a good time to experiment with a potential Day 3 draft steal.