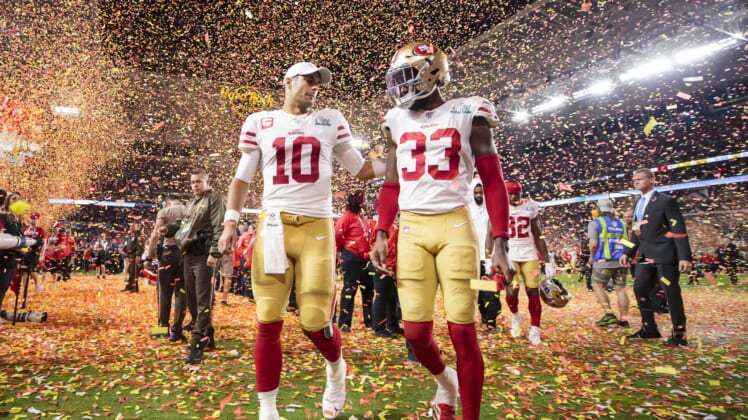 The San Francisco 49ers were six minutes away from hoisting their sixth Lombardi Trophy earlier in February.

That’s when things went horribly wrong for Kyle Shanahan’s squad in Super Bowl LIV against the Kansas City Chiefs. San Francisco was up 10 with just over six minutes remaining, only to lose the game by two scores.

It was one of the biggest meltdowns in Super Bowl history. And while the 49ers are built for long-term success, recent history suggests that a hangover could be in the cards next season.

Here’s why: The Atlanta Falcons and Los Angeles Rams are two recent examples of teams that lost the Super Bowl who failed miserably the following season.

It’s more than possible. The 49ers were able to have success playing a third-place schedule and taking on the AFC North last season.

Now set to go up against the AFC East and having to play a first-place schedule, things are going to get more difficult.

Here, I look at what San Francisco must do to avoid that almost inevitable Super Bowl hangover.

Move the fat: There’s also multiple players the 49ers can release who did not play big roles this past season.

Now that this house cleaning is taken care of, San Francisco would enter into free agency a robust $65-plus million under the cap. Though, it must start with retaining their own players.

Go all in: While San Francisco’s Super Bowl window seems to be wide open, we know very well it can close in a hurry. The team must go all in to address some areas of concern this offseason.

Punt on the 2020 NFL Draft: San Francisco has just one selection in the first four rounds of April’s annual event. The team knows it’s not going to upgrade big time here.

The 49ers are in win-now mode. They shocked the football world by earning the NFC West title, a first-round bye and a Super Bowl appearance last season. They’ll now be the target. That’s a dramatic change from a season ago.

It’s in this that Lynch and Co. must remain proactive in upgrading their roster to fend off the Seahawks and Rams in their division.

This means upgrades at wide receiver, on the interior of the offensive line and in the defensive backfield.

Coming away with Freeman, Green, Scherff and Slay would be a pie in the sky end result. But the team can make it work.

If so, the idea of a Super Bowl hangover in Northern California could potentially be thrown out the window.