How Raiders Handle Brown Blowup Will Have Lasting Impact 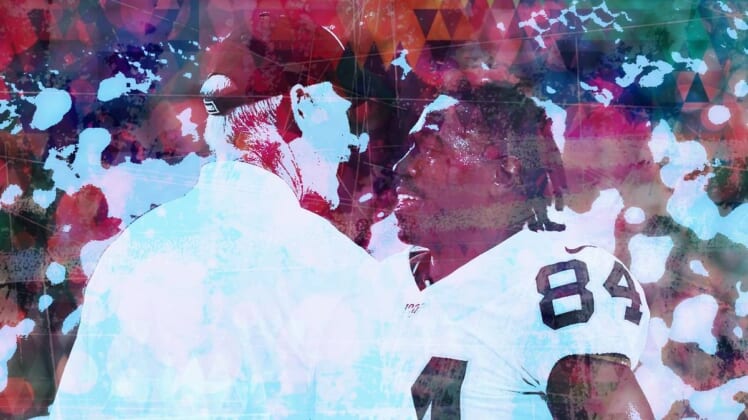 The mess created by star wide receiver Antonio Brown’s violent outburst at general manager Mike Mayock is still in flux. How the team handles discipline and its approach will have a long-lasting effect on the organization.

This column originally appeared on the CBS Sports Radio 1140 website.

It’s been a wild and crazy 48 hours in Raider Nation.

The continuing saga of Antonio Brown has many layers and it’s ending is hard to predict. Fans oscillate between wanting Brown to avoid a suspension to wanting general manager Mike Mayock to outright release the player he traded for earlier this year.

It’s a typical schizophrenic reaction from a fan base with little to celebrate or feel good about over the past 17 years. Yet, the very soul and rebuilt culture of the Raiders organization is in play here. The decision made by the team on Brown could have last impact on the future of the club as it readies itself to move to Las Vegas.

First, let me say this: I have been a vehement supporter of the team’s approach with Brown this season.

The player had every right to use the system to protest his helmet issue and Gruden and Mayock let it play out. Brown is a challenging personality to deal with – something they knew when they traded for him. Yet, the team did a good job of allowing this to play out. They also were patient with him and his feet. Injuries happen even when it’s the player being careless. It happens all the time.

Those now criticizing the Raiders for how they handled the situation doesn’t allow for any nuance how you manage people. It doesn’t matter what business you’re in, your employees have differences and you account for them with how you manage them. As former NFL running back Ickey Woods told me last night: “Anyone who tells you there isn’t a different set of rules for players like AB, they’re lying. There are different rules and what teams will tolerate from star players.”

It’s easy to say: they should have taken a hardline approach with Brown. These folks claim the Raiders wouldn’t be in this situation. It’s not based in reality or does it keep on track with the facts here. It’s not 1975 and coaches and front office folks can’t just scream, yell and force players to do what they want.

We live in a different world, with different young people and a different NFL. Ironically, these are the same people that criticized Gruden for being “past the times” when he first returned to coaching. Now, he’s handling his player in a more contemporary fashion and it’s wrong. Seriously, make up your mind folks.

All of this frivolous discussion lets Brown off the hook for his own actions. He’s a grown man who knows right from wrong (we think). I don’t care who you are, you don’t threaten to punch your boss in the face. If you want to criticize the Raiders at all for any of this, it’s simple: criticize them for trading for Brown in the first place.

You now have people calling on Gruden to go “all Chucky” on Brown. You have those criticizing the coach (and head of the Raiders organization) saying he’s not handling it well. That’s not only ridiculous, but those who have been in similar situations agree Gruden and Mayock have done the right thing in their approach.

Yes, there has been the “good cop, bad cop” vibe going on in Alameda. It’s the right approach. Those looking for blame here will find it where they want. Looking at the facts, and how it’s all unfolded, the focus should be on Brown and his actions – not trying to prove right or wrong on the approach by Raiders brass.

That doesn’t mean how Gruden and Mayock handle this situation over the next few days won’t have a lasting impact. This is Gruden’s ship to steer and he’s remade the roster in the image he wants as the team gets ready to move to their new home. The buck stops with him. He’s got a smart and capable partner in Mayock and this is a big and unique challenge for this team and how it charts its course into the future.

In my view, they have no choice but to suspend Brown and make a statement that truly no one player is bigger than the team. Is it one game? Two games? Or do they drop the mother of all discipline bombs and released Brown thereby voiding his $30 million guaranteed salary?

Those guys get the big bucks to make those decisions and no matter what fans or media say, it’s theirs to make. No matter what they do, it will be second-guessed.

But make no mistake: they have to do something and just letting “AB be AB” can’t be one of them.