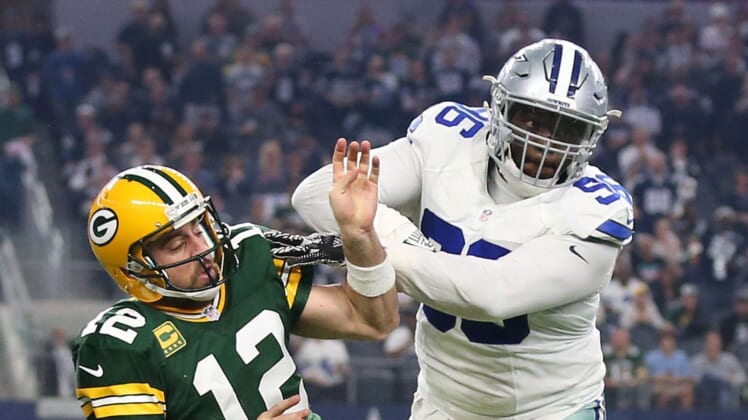 There’s no doubting the Las Vegas Raiders free agency moves made the team better – especially on defense. How does that change the overall look at their roster?

The Las Vegas Raiders free agency additions included a little bit of everything during the early wave – a big splash. misses, and shrewd bargain-bin pickups.

Aside from linebacker, general manager Mike Mayock and head coach Jon Gruden filled needs with rotational players who could blossom into solid contributors. That’s not an issue for a team with two top-20 draft picks.

The Raiders free agency acquisitions add serviceable placeholders at shallow positions to give themselves some flexibility in April.

We’ll break down the Raiders free agency acquisitions that stood out and how those moves changed the roster complexion.

Derek Carr Gets a Push, Not Pulled

It’s become a yearly offseason routine to hear about the next quarterback set to take Derek Carr’s job. Last year, the Raiders were connected to almost every top rookie signal-caller in the draft. This offseason, the team had eyes on quarterback Tom Brady, but the level of interest remains debatable.

Still, the Raiders upgraded the quarterback room, signing Marcus Mariota who will step into a backup role. Despite losing his job to Ryan Tannehill in Tennessee, the 26-year-old has the tools to run Jon Gruden’s offense. He can be efficient, doesn’t throw a lot of interceptions and shows great mobility.

In an interview with Rob DeMello of KHON2 News in Hawaii, Mariota called the Raiders “Derek’s team,” which is the supportive nature of a backup signal-caller, but he also used the word stability multiple times.

Even though Mariota says it’s “Derek’s team,” he understands the opportunity to reinvent himself in Silver and Black with a stable coaching staff.

If Carr goes down with an injury or has a poor showing through a long stretch, Gruden could call on the next man up—similar to how the Titans’ situation unfolded between Mariota and Tannehill.

Mariota is one of the best backups in the league. The Raiders paid him what he’s worth at about $8.8 million annually plus some bonuses in the event the five-year veteran sees the field, but the team can also release him without any dead cap next offseason.

So let’s be clear. Gruden didn’t sign Mariota to replace Carr, but the former is capable of running the offense if the incumbent doesn’t perform up to par. Unlike most teams, the Raiders have a No. 2 signal-caller with extensive starting experience, which extends to the playoffs, and upside because of his youth and skill set.

If you’re bored indoors, watch tape of Jerry Jeudy, CeeDee Lamb and Henry Ruggs III because Gruden and Mayock will likely address the wide receiver position in the first round.

The Raiders had wide receiver Robby Anderson on their radar, but the team exercised some restraint, per The Athletic’s Vic Tafur.

According to Over the Cap, the Raiders have $6.47 million in projected cap space. That number doesn’t include contracts for guard Eric Kush, defensive end Carl Nassib, tight end Nick O’Leary and linebacker Kyle Wilber.

Agholor isn’t a splashy signing, but he can provide much-needed depth and speed at the position.

Because of Las Vegas’ limited cap space, the team stood pat with Nelson Agholor as the only wide receiver Raiders free agency addition on a one-year deal worth a little more than $1 million.

Agholor isn’t a splashy signing, but he can provide much-needed depth and speed at the position. With the Philadelphia Eagles, the 26-year-old had his ups and downs but never reached his full first-round potential because of drop issues early in his career.

According to Pro Football Focus, Agholor only has seven drops since 2018. With his ability to separate, catch and run, he could give the Raiders passing game a boost in some spots.

Nonetheless, the lead wideout who’s going to elevate the offense will likely join the team with the 12th overall pick—say hello to Jeudy, Lamb or Ruggs in April.