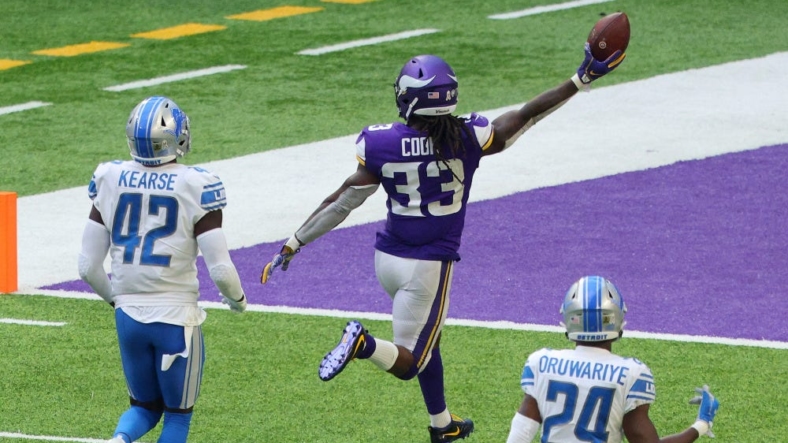 The Detroit Lions are like two completely different teams. First, there is a finesse team that looks for creative ways to cover up a lack of talent on offense. Second, there is a defense that can generally be compared to a pack of dogs chasing down a bowl of mashed potatoes and gravy. The question is, which of those two things is more interesting for a Purple Path Forward?

Which of these drives impresses you most/least:

The Lions had exactly one impressive drive in the first half; an effective, 9-play, 77-yard drive. But because of the Commanders’ general ineptitude, this resulted in a 22-0 lead. They needed Carson Wentz to fumble out of the end zone and get a 52-yard kick return to get things going.

They might not be the Buffalo Bills or Kansas City Chiefs, but they do look like a functioning NFL team, and they did have some big plays that just didn’t happen to align with their scoring drives. Take a look at the two explosive plays they had in that first half.

The play design worked. They fooled the Washington secondary, so they had three guys following a decoy receiver. This isn’t a tough throw for Goff. St. Brown picks up more than 30 yards after the catch. St. Brown also broke a big run on a jet sweep later in the game, not a deep route.

Also nothing really fancy on this play. We count at least three Washington defenders who have a decent shot at stopping this play swiftly, however as D’Andre came through the hole, he was just too quick.

Swift had a very similar play against the Eagles where he just ran straight between guys for 50 yards:

Looking at the Lions’ first two games, one thing stands out: For all the points they have scored, the explosive plays have come from runners getting through the linebackers and into the secondary, not throwing the ball over people.

Related: See where the Minnesota Vikings rank in the 2022 NFL defense rankings

Jared Goff hasn’t shown that he can beat teams with a deep passing game. The Lions have schemed guys open underneath and relied on Swift’s wiggle to get free. The Vikings need to know the abilities and limits of their opponent. They need to close down Swift aggressively and take away the short passing game. Close off the short stuff and take your chances with Goff throwing deep; the deep shell the Vikings played against the Eagles will get the Vikings killed in this game. Eric Kendricks and Jordan Hicks will need to be sure tacklers.

While that’s an interesting lesson for the Vikings’ defense, the real key on how to beat the Lions comes from the Vikings’ offensive side of the ball.

The Lions are aggressive on play calling; they will go for it on fourth down and blitz a lot. They are also aggressive hitters. They will hit low, late, lead with their heads, and any other time they can to disrupt their opponents. The Lions’ defense walks a very fine line between aggressive and dirty.

The best graphic we can come up with is to chart how many teams each player has blitzed; this chart includes all non-DL/Edge player blitzes for both the Lions and Vikings:

This discrepancy is crazy, especially as a Vikings fan who is used to seeing Harrison Smith creep up to the line and blitz with some regularity. The Lions blitz from everywhere, and they do so way more than the Vikings. That puts Anzalone on pace for 136 blitzes this year (for context, in 2021: Kendricks led the Vikings with 67; Devin White led the league with 133)

This is where opponent scouting comes into play. We’re not talking about play tendencies, formation usage, or player skill sets. Kevin O’Connell will have to realize and prepare his players to face a team that plays with a fundamentally different culture than the one the Vikings use (and also different from the Packers or Eagles).

It’s hard to get a still-frame image of an aggressive pass rush, but this is close. This is a 9-yard sack by the Lions:

You can see the Lions’ strategy in effect: everyone goes after the quarterback as hard and as fast as you can. The line of scrimmage is the 30; every pass rusher is at least 7 yards into the backfield. Washington was unprepared to counter this in the first half. They didn’t keep extra blockers back. The running back was starting to leak out to the top for a check down, but it was too slow, and his blocking wasn’t effective. The Vikings will need to be prepared for this uniquely aggressive defense.

How to beat the Lions

The Vikings have to do two things.

First, they need to embrace the opponent they are facing – and this has nothing to do with scheme or tendencies. They need to know that undisciplined aggression is coming. If they think the Lions are playing by the same rules as the Packers, they are wrong, and there will be plays where the Vikings look unprepared.

Second, the first thing does NOT mean they need to match Detroit’s intensity. In fact, if they do, they will probably lose – that’s not the kind of team the Vikings are.

The Vikings need to remember, football isn’t about hitting the other guy harder. It’s about getting the ball to where the other guys aren’t. Aidan Hutchinson is a high motor guy with one speed: “Quarterback!” Great, throw a screen over him. The Vikings need to be prepared with protection. If the Vikings win, there will be a big play where Dalvin Cook or Alexander Mattison make a great blitz pickup to get Kirk Cousins an extra second.

Bottom line: the Vikings have the players to win this game. The Lions are better than they have been. Their biggest improvement may be that they recognize their own strengths and weaknesses and play to them. The Vikings will need to do the same to win this game.