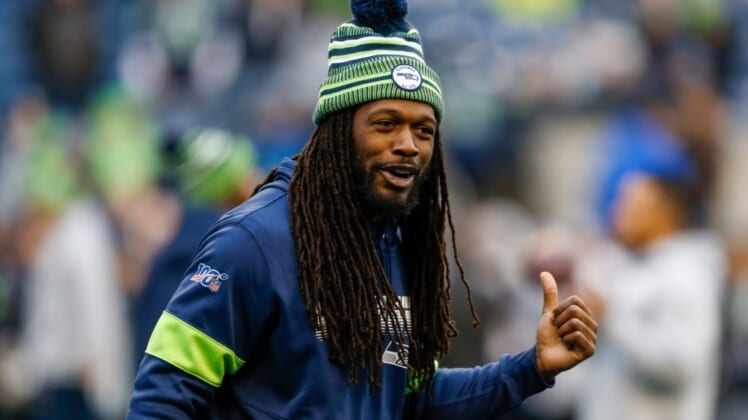 While the Las Vegas Raiders head to camp with their young draft class under contract, the team can still make a play to signed defensive end Jadeveon Clowney.

The Las Vegas Raiders signed the entirety of their rookie class Saturday but didn’t make any moves to close out the weekend, but a blockbuster trade could push defensive end Jadeveon Clowney closer to an offer from the team.

The New York Jets dealt safety Jamal Adams and a fourth-round pick to the Seattle Seahawks for safety Bradley McDougald, a 2021 first-rounder, 2021 third-rounder and a 2022 first-rounder, per ESPN’s Adam Schefter.

The Seahawks don’t have to sign Adams to an extension right away since he has two years left on his deal. According to ESPN’s Jeremy Fowler, Seattle could wait to draw up a new contract for him. The NFL Insider also reports this acquisition likely closes the door on Jadeveon Clowney’s return to the Seahawks:

Now, think back to three weeks ago. Cecil Lammey of 104.3 The Fan reported the Raiders made an offer to Clowney, but two or three clubs had better proposals:

Since then, the Browns signed Myles Garrett to a five-year, $125 million extension. Cleveland restructured fellow defensive end Olivier Vernon’s contract, which will guarantee him $11 million for the 2020 season, per ESPN’s Field Yates.

Ben Axelrod of WKYC 3News thinks the Browns have moved on from Jadeveon Clowney after modifying Vernon’s deal.

“Whatever the case may be, barring an unforeseen spending spree, it appears the Browns have ended their pursuit of Clowney, who registered three sacks and seven tackles-for-loss in 13 games with the Seattle Seahawks last season,” Axelrod wrote. “Instead, Cleveland will hope for a bounce-back year from Vernon, who recorded 3.5 sacks in 10 games during an injury-plagued first season with the Browns.”

So if Lammey is correct in saying three teams stood ahead of the Raiders in line for Jadeveon Clowney, who’s the third potential suitor? It’s clearly the Tennessee Titans.

“I know he wants to play,” Robinson said. “I think we would be a pretty good fit for him. There was some mutual interest there when we started the discussions, but I would say that really hasn’t grown legs since we spoke last.”

According to Over the Cap, the Titans have $23.5 million left to spend on player salaries while the Raiders have approximately $6 million.

Assuming the Browns are content their defensive ends, the Seahawks’ deal for Adams coupled with the looming investment to keep him leaves the Titans and Raiders in a two-team battle for Clowney.

Still, we have to crack the door open for a dark-horse suitor. Clowney told NFL Insider Josina Anderson that he’s “still open” on his options:

Regardless of where Jadeveon Clowney signs, he’s not going to ink a deal close to his desired $20 million annually. The three-time Pro Bowler will have to settle for the best offer available.

According to Over the Cap, the Titans have $23.5 million left to spend on player salaries while the Raiders have approximately $6 million.

The Raiders don’t have a major need at defensive end, but head coach Jon Gruden understands the more the merrier with his pass rush. The defense will attempt to chase down Patrick Mahomes, Tyrod Taylor, who’s also mobile, and Drew Lock with the Denver Broncos’ revamped offense.

While some fans worry Clowney could take snaps away from Clelin Ferrell or how the move would reflect on the No. 4 overall pick from the 2019 draft, the Raiders should focus on how to improve their defense, specifically the pass rush, with new starters in the secondary and limited experience on the edge.

Mayock and Gruden shouldn’t have much concern for the outside perception on Ferrell possibly splitting snaps with Clowney if the latter can improve the defensive line.

Clowney will likely cost $11-12 million even as a one-year rental, which means the Raiders would probably make small moves to accommodate his salary. For a single season, he’s worth the risk.

The Silver and Black have the most questionable defense in the AFC West. If Gruden wants to contend for a playoff spot, which has an additional seventh seed this year, he’ll need his defensive unit to pull its weight. On his watch, the Raiders have ranked 32nd and 24th in points allowed.

Yet, if we look beyond Clowney’s low sack count, he still recorded 30 quarterback pressures in 2019. The 27-year-old has to close the deal on more sacks, but he can make signal-callers uncomfortable in the pocket, which usually leads to hurried throws or an assist to interior pass-rushers on sacks.

Clowney has ties to Titans lead skipper Mike Vrabel, who served as a linebackers coach and defensive coordinator for the Houston Texans between 2014-17. On the other hand, Gruden has been able to charm free agents with his energy once he meets with them.

If Tennessee and Vegas come to the negotiating table with similar offers, Jadeveon Clowney’s decision could come down to scheme fit and the chance to win as much as possible in 2020.