The Tampa Bay Buccaneers have a surplus of wide receivers, which part of the reason why Chris Godwin is playing under the franchise tag in 2021.

NFL Network’s Tom Pelissero reported that ahead of the July 15 deadline, Godwin and the Bucs “don’t appear close” to striking a multi-year deal, per NFL.com’s Kevin Patra.

With that in mind, it’s worth digging into what a new deal for Godwin might amount to, and how Tampa Bay can fit it into the salary cap to ensure it remains in Super Bowl contention in the coming years.

Mike Evans signed a five-year deal worth $82.5 million, but that was back in 2018, and of course, he’s definitely the No. 1 wide receiver on the Buccaneers’ depth chart.

Evans is often banged up and playing through injuries, yet when he’s right enough to play, he’s been well worth the investment. There’s no question Godwin is an excellent go-to possession target. He did miss four games last season, but hauled in 65 of 84 targets from Tom Brady for 840 yards and seven touchdowns.

Because the salary cap is only going to continue escalating after this year, Godwin will want to be paid top dollar. It might not be realistic to expect a team already paying one receiver big money to do so with another. Well, that’s probably what the Seattle Seahawks are looking at soon with DK Metcalf and recently-extended Tyler Lockett.

Seattle actually got Lockett on a four-year, $69 million extension, and he’s clearly second fiddle to the size-speed freakazoid that Metcalf is. Pushing Godwin a few million above Lockett seems like a reasonable move for Tampa Bay general manager Jason Licht to make, since Godwin is the WR2 to Evans.

Now, the question is, what sort of salary cap gymnastics does Licht have to stick the landing on to ensure he keeps the Bucs’ phenomenal nucleus together?

Tom Brady takes yet another pay cut or restructures

Tom Terrific has to be considered the GOAT now, if there were ever any doubt, after leading the Bucs to a Super Bowl in his first season with the team. This was on the heels of Brady’s two decades with the New England Patriots, where he consistently took less money to help the team.

Brady is in a special situation where he’s entering his age-44 season. He understands he can’t exactly command top-market QB money. Then again, he doesn’t really need to be a big cap burden. As Licht did his best to keep the Bucs’ roster intact this offseason, Brady extended his contract and structured it to create cap space.

If Tampa Bay wins back-to-back championships, maybe the Bucs will feel inclined to reward him financially. On the other hand, Brady is more interested in winning than anything else and probably won’t accept a pay bump if it deters from the overall team goal of defending the Lombardi Trophy.

We shouldn’t consider this a mere formality, because who knows what Brady’s future holds? That said, if Godwin’s extension is on the books and Licht takes care of some other key pending free agents, it’s a pretty safe bet that Brady will do his part to make room for them.

JPP is actually due to be Tampa Bay’s second-largest cap hit for this year at $12.8 million. He probably won’t cost that much on the open market given that he’s nearing the end of his career. Nevertheless, this is one tough decision the Bucs will need to make, and hope their depth can make of for Pierre-Paul’s loss.

Cornerback Carlton Davis is likely to get re-signed, and his price tag will depend how well he plays this coming season. The same can be said for center Ryan Jensen, as Brady probably won’t want to disrupt continuity on the offensive line if it’s avoidable.

We’re looking at you, Joe Tryon. The last pick in the first round of the 2021 NFL Draft out of Washington, Tryon is a complete wild card. He opted out of the Huskies’ 2020 season, and completely transformed his body so as to be an entirely different player than the last time he hit the gridiron. 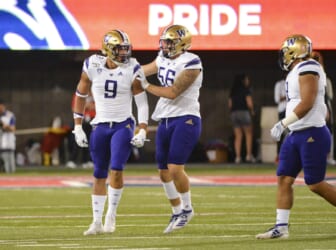 Also Read:
Tampa Bay Buccaneers draft Joe Tryon in the first round of the 2021 NFL Draft

Washington coach Jimmy Lake told The Athletic‘s Greg Auman the following: “Had [Tryon] played in 2020, I think he probably would have been in the top 10 because everybody would have seen the type of talent he has.”

Other than a complete misfire in the second round on kicker Roberto Aguayo and the inability to find a QB before Brady, Licht has been fantastic in the draft for the most part. If Tryon is a huge hit, Tampa Bay can get a quality edge defender on the cheap in place of JPP and won’t have to pay him for a few years.

When looking at the Bucs’ 2021 draft from the perspective of Pierre-Paul’s future, it was savvy on Licht’s part to grab someone like Tryon. Time will tell if Tryon proves to be the better choice over other highly regarded players on the board at that time, such as Georgia’s Azeez Ojulari, who went to the New York Giants in Round 2.