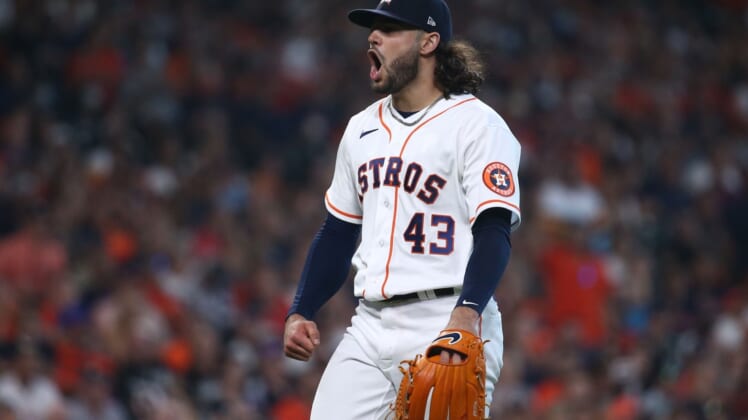 The Houston Astros get an opportunity to get back to the top of their starting rotation when their rain-delayed American League Division Series against the host Chicago White Sox continues with a second crack at Game 4 on Tuesday afternoon.

The White Sox have elected to stick with original Game 4 starter Carlos Rodon (0-0).

A 13-game winner in the regular season and veteran of 15 postseason appearances with a 2.87 ERA, McCullers pitched brilliantly in Game 1 of the series, shutting out the White Sox over 6 2/3 innings on four hits without issuing any walks.

He’s been the only starting pitcher who has thrown well in the high-scoring series, a factor that helped sway Baker’s opinion when the original plan was to save the club’s big gun for a potential Game 5 at home.

Baker applauded Major League Baseball’s decision to call off Monday’s game, which he thought was the fairest thing to do in that it gave both staffs a chance to lick their wounds after the teams had combined for 38 runs in the first three games.

“It gives both sides another chance at resting their bullpen,” he observed, adding that he’ll have all hands on deck for Game 4. “We’ll see the effects of it (Tuesday).”

La Russa had the option of bringing back his Game 1 starter, Lance Lynn, but opted for Rodon, who arguably was Chicago’s best pitcher this season when he wasn’t injured.

The left-hander tied Dylan Cease for the team lead in wins with 13 and had the best ERA among the starters (2.37, 32 points better than Lynn), but missed most of August with what was termed arm fatigue, then complained of soreness in the same arm when pulled early from his second-to-last start of the regular season.

Wanting his manager to recognize that he was itching to get another shot after having been bombed for five runs and six hits in 3 2/3 innings in the series opener, Lynn announced himself ready for duty and reported to the bullpen on Sunday.

Chicago reliever Aaron Bummer said he would expect nothing less from any of his current teammates, especially with the season on the line.

“Playoffs come around. The end of the season came around, the egos went out the window,” he insisted. “We’re all pulling for the same common goal to go out and throw up zeroes.

Leury Garcia and Yasmani Grandal had home runs for the White Sox in Sunday’s win, the AL Central champ’s first two homers of the series.

The Astros, champions of the AL West, have countered with three homers, two from Kyle Tucker, the series leader in RBIs with seven.