Houston Texans coach David Culley expects a boost at quarterback for his 1-6 club this week.

No, not $150 million quarterback Deshaun Watson.

Culley said Monday that 31-year-old Tyrod Taylor is due back this week after missing five games while recovering from a hamstring strain. With Taylor, who has been the starter for the Ravens, Bills, Browns and Chargers before signing with Houston in the offseason, the Texans won Week 1 and led the Cleveland Browns in Week 2. 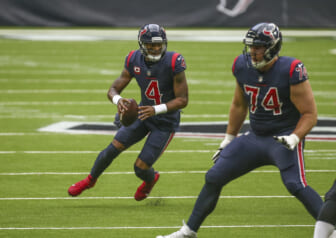 When Taylor was injured at Cleveland, the Texans turned to rookie Davis Mills.

Taylor will resume full practice on Wednesday as the Texans prepare to tangle with the Los Angeles Rams (6-1).

‘I don’t know if he’ll be able to go, but he will practice on Wednesday. We’ll just take it day by day,” Culley said. “We need a lift.”

There is no lift coming from Watson, apparently, unless it comes in the form of draft capital via trade.

Multiple reports indicate the Texans are actively engaged with Watson, who has veto power through his no-trade clause, and other teams seeking to acquire the quarterback before the Nov. 2 trade deadline.