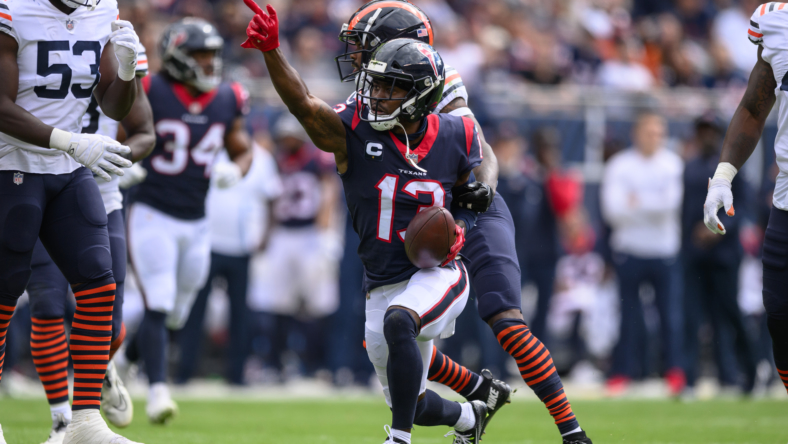 It’s true. The Houston Texans are open to trading 29-year-old wide receiver Brandin Cooks, who’s also hoping to go to a contending team ahead of the Nov. 1 NFL trade deadline.

For any team hoping to add another playmaker to their passing offense, seeing how productive Cooks has been in each of his three stops playing in different scoring attacks has to be exciting. Yet, the Texans also like the fact that Cooks provides young quarterback Davis Mills with a reliable option who can consistently get open.

In other words, they’re not going to just give Cooks away simply because they’re not in a position to succeed in 2022. Cooks is still under contract for the next two seasons, even if his salary is a bit inflated.

Even then, any franchise hoping to add a spark ahead of the deadline would be foolish to ignore the thought of adding the six-time 1,000-yard receiver in 2022. Cooks has a $9.7 million cap hit this season, which jumps to $26M and $24M in the next two years.

For many teams, adding just under $10 million to their immediate cap sheet isn’t much of an issue. Contract restructures are always an option, especially if the chance to win a Super Bowl is actually on the table.

While we’re far from February, the urgency of trying to improve now is very much alive due to the impending trade deadline. This means teams such as the Los Angeles Rams, if they want to copy last year’s ‘F them picks’ approach, they need to strike now.

In fact, the Rams are a team that’s been mentioned to bring Cooks back to the team before Tuesday’s 4 PM ET deadline. Yet, as we said, the Texans aren’t in the giving mood and are asking for at least a second-round pick in trade discussions.

Now that we know the cost, which teams make the most sense to pay the price for Cooks before Nov. 1?

As Dov Kleiman passes along, the teams most frequently linked to Cooks are the Los Angeles Rams, Minnesota Vikings, and New York Giants.

With each team, aside from the Rams, boasting a winning record, Cooks would appear to fit in each destination, but each franchise is headed in a different direction, and each has a different bounty of draft assets, as well as a tight budget.

The Rams have the most familiarity with Cooks, and if you’re seeing things from the player’s perspective, this is the team he’d likely prefer to land with. They already won a Super Bowl, and although they have the worst record of the three teams mentioned, the Rams also may have the best mix of talent.

Joining the Rams likely springs Cooks into a situation where he’s the second-leading option in a pass-heavy offense. Not a bad fit. They do have their second-round pick still, so they’re a legit option.

In New York, they don’t have anything resembling an NFL-caliber receiving corps, but Cooks would immediately be the top option for Daniel Jones. Still, it’s a run-heavy approach, and there’s no guarantee Cooks would flourish in the Big Apple either. Complicating matters even further, new GM Joe Schoen may not be willing to part with his precious draft compensation, with the Giants still likely a year away from being a true competitor.

This brings us to Minnesota, which already has one of the best wide receivers in football in Justin Jefferson, an offensive-minded head coach who prefers to pass, and perhaps the need to add another weapon who can help draw defenses away from Jefferson. Adam Thielen is a proven redzone option, and KJ Osborn has been ok in a reserve role as the third receiver, but they’re not scaring anyone.

Adding a deep threat such as Cooks to an offense that lacks speed at receiver could help push what ranks as the seventh-best scoring offense into the top five. The biggest hurdles to clear here are cap room ($1.3M) and draft compensation once again. The Vikings are already without their fourth, sixth, and seventh-round picks in the 2023 NFL Draft. Do they really want to part with their second-round selection as well? Probably not.

In review, the Rams are probably still the best fit, with the Vikings coming in second, and the Giants looking more likely to add young, inexpensive (cap-wise) talent ahead of the deadline.