The Texans activated quarterback Tyrod Taylor in time for him to start Sunday when Houston visits the Miami Dolphins.

Taylor sustained a strained hamstring in Week 2, a 31-21 loss to the Cleveland Browns, and has been sidelined since. He was designated to return from injured reserve on Oct. 27, and coach David Culley said Friday that Taylor hadn’t had any setbacks in his recovery.

In his absence, rookie quarterback Davis Mills directed the offense to an 0-6 record. The Texans are 1-7, as are the Dolphins.

Before the injury, Taylor had completed 70.5 percent (31 of 44) of his passes for 416 yards with three touchdowns and no interceptions. Taylor, 32, has a 4-2 career record against Miami. 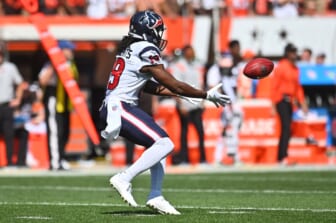 Also Saturday, the Texans put linebacker Christian Kirksey on injured reserve. The 29-year-old broke his thumb in a Week 7 loss to the Arizona Cardinals but played 91 percent of the defensive snaps last week against the Los Angeles Rams.

In eight starts this season, Kirksey has 56 tackles, an interception and a fumble recovery.

The Texans also elevated defensive back Jonathan Owens to the active roster from the practice squad.