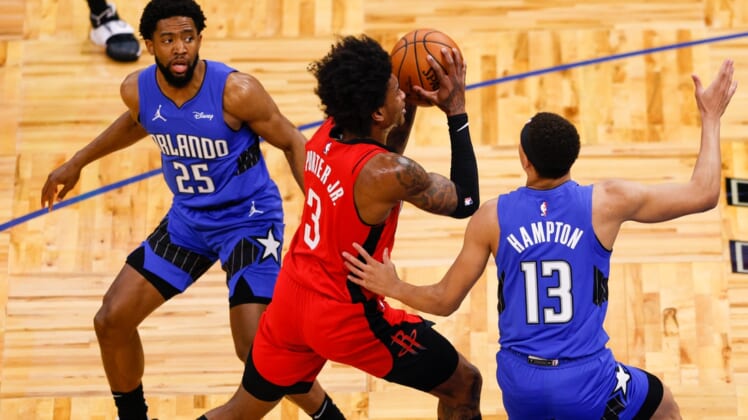 Christian Wood posted his 17th double-double, Kelly Olynyk chipped in 24 points and two critical free throws with 14.4 seconds left to play as the visiting Houston Rockets snapped a five-game losing skid with a 114-110 victory over the Orlando Magic on Sunday.

Wood finished with 25 points and 10 rebounds to pace the Rockets, who had dropped 10 of 11 entering play. His 10-foot jumper with 39.9 seconds left extended the Houston lead to five points but the Magic did not relent, with rookie guard Cole Anthony making a 3-pointer and a driving layup that kept the Magic in contention. But Olynyk and Avery Bradley sealed the win at the line.

Kevin Porter Jr. added 22 points and seven assists for the Rockets before fouling out in the fourth quarter. Armoni Brooks scored 16 points on 5-of-6 3-point shooting off the bench, including a pair of 3s early in the fourth that helped the Rockets extend to a 90-77 advantage.

But the Magic, behind 11 fourth-quarter points from Dwayne Bacon, closed to within two points late. Bacon finished with 22 points and three steals. Anthony and Gary Harris added 16 points apiece for the Magic, losers of eight of their last nine.

Chuma Okeke paired 14 points with four steals while Wendell Carter Jr. and Mo Bamba combined for 22 points and 19 rebounds in the post.

Brooks’ 3-pointer with 2.9 seconds left in the first quarter pulled the Rockets even at 28-28 and capped a period that featured six ties and five lead changes. Orlando then took control with a 10-0 run to take a 38-32 lead in the second, a spurt that featured 3s from Chasson Randle and Okeke plus two free throws and a layup from Bacon. The Magic extended to a 54-42 lead on an Anthony technical free throw at the 1:51 mark before Houston closed the first half on an 11-5 run.

Porter hit two 3s as part of the run and entered the intermission with 15 points. Bacon paced the Magic with 11 points but four others capped the half within a 2-point basket of double digits for Orlando.

Wood scored nine points in the third and was the linchpin of a 20-4 run that put Houston ahead.