Green, the No. 2 overall pick in the 2021 NBA Draft, sustained in the injury during the second quarter of a Summer League game against the Toronto Raptors on Thursday in Las Vegas.

Green, who had 13 points and three rebounds before exiting the game, likely will be held out of the remainder of the Summer League schedule, per the report. 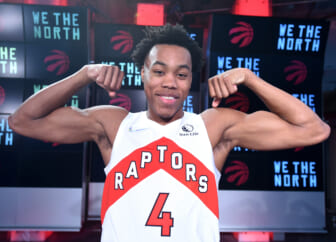 “I don’t have anything to prove here,” Green said to the Houston Chronicle after the game. “I got to prove it in the NBA, and that’s what I’m going to try to do.

“I think I proved myself this week. We’re just going to be cautious and get ready for the season, in case it is anything. But it’s just tight. I feel good. I’m sad that I had to leave that game, but I feel good.”