At this point, why not? From Joe Johnson to Greg Monroe, we’ve seen several blasts from the past return to the NBA this season. Now, we can add high-flying swingman Gerald Green to the list.

Although he was working with the Houston Rockets as an assistant coach on their staff, now Green, a 12-year veteran at age 35 wants back in to the NBA as a player. Who can blame him? With practically any player with experience who’s still under 40 getting another chance due to several players being wiped out from COVID protocols, why shouldn’t Green try and get a 10-day contract as well?

Per Shams Charania of The Athletic, Green plans to sign with the G-League with an aim of returning to the NBA.

Green last played in the NBA in the 2018-19 season, which also came with the Rockets. He’s played for a total of eight teams, including the Minnesota Timberwolves where he had this unforgettable cupcake slam in the 2007 NBA Dunk Contest.

Like many other athletes signing to 10-day deals, there’s no guarantee they will receive another, longer contract. This at least offers a chance to get another taste of competition at the highest levels. While there have been several other players unretiring to return to the hardwood this year, Green is believed to be the first coach to do so.

Who’s next, Dirk Nowitzki? We kid, but now that he’s had his jersey retired by the Dallas Mavericks and already is a shoo-in for the Basketball Hall of Fame, maybe he’s more interested in playing a few games with Luka Doncic. Don’t hold your breath.

Whatever happens with Gerald Green’s newfound NBA playing career, we wish him the best. Nobody should be discouraged from getting back on the court if they feel it’s safe for them to do so. Green’s final NBA season was mired by a foot injury, now he’s looking to show he has a little left in the tank, who knows what it could lead to? 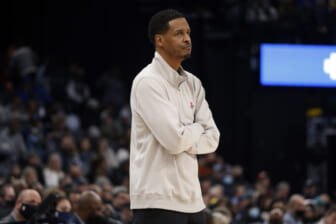