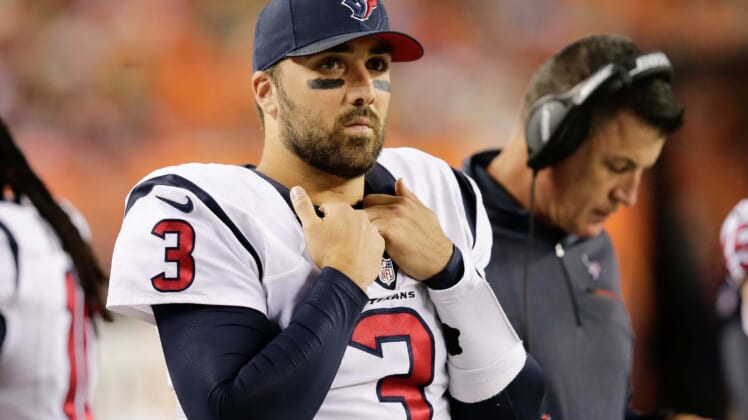 Fans in Houston were expecting the Texans to come out on fire. That didn’t happen. Instead, Tom Savage and the team’s offense got overwhelmed by the Jacksonville Jaguars. In fact, well before halftime was in sight, Texans fans were already booing their team.

Here’s a short video of Savage being pulled off the turf following his second sack of the game. You can hear fans booing in the background as Houston’s offense walks off the field following its fourth failed offensive drive of the game and its third three-and-out.

DANTE'S INFERNO!
CAMPBELL'S 1.5 SACKS!
TEXANS FANS BOOING AND IT'S NOT EVEN HALFTIME! pic.twitter.com/puowbb39b9

That’s harsh. But it’s also not all that surprising. Savage and the team’s offense has been awful.

All precincts have yet to report, but early returns suggest #Texans Tom Savage offense looks a lot like the #Texans Brock Osweiler offense.

Houstonians were expecting their team to do big things Sunday. They gave J.J. Watt a standing ovation during pre-game introductions, showing just how passionate they were to be there supporting their team after the community suffered such devastation from Hurricane Harvey.

Hopefully Savage and the offense can get on track. If not, things are going to get real ugly, real quick. Is it Deshaun Watson time already?