Houston faces Temple with all signs pointing to a shootout 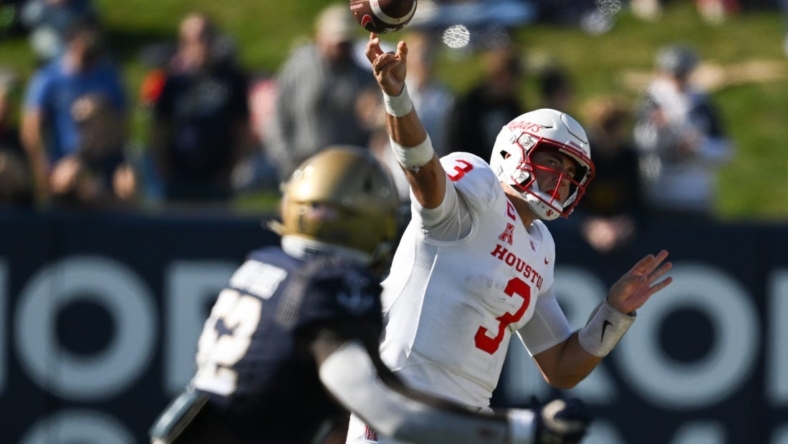 It would be easy to criticize Houston’s defense following last week’s 77-63 loss to SMU.

But Cougars coach Dana Holgorsen took the opposite approach.

As the Cougars (5-4, 3-2 AAC) prepare to host Temple (3-6, 1-4) on Saturday in an American Athletic Conference game, most questions in Holgorsen’s weekly press conference were directed toward the performance of Houston’s defense in the prior game.

SMU scored on its first nine drives and 11 of 12 overall.

“I don’t think that’s who we are defensively,” Holgorsen said. “Our guys competed. If I was looking at a defense that loafed and was not playing with effort and not competing, we’d have a real problem. It wasn’t that.”

Houston’s goal now is to quickly erase those bad memories.

“Better do it quick,” Holgorsen said. “Got a hot Temple coming in. We can’t overlook this one. They’ve got my attention. And we’ll make sure they get our players’ attention as well.”

On a positive note, Houston quarterback Clayton Tune threw for 527 yards and seven touchdowns. He also rushed for 111 yards and a score.

Temple, meanwhile, will look to build on its momentum following a 54-28 victory over South Florida. The Owls were dominant on both sides of the ball and didn’t record one punt for the first time in program history.

Running back Edward Saydee set career highs in rushing yards (265) and rushing touchdowns with three. He compiled 334 all-purpose yards, and quarterback E.J. Warner passed for a career-best 344 yards for the first 300-plus yard effort of his career.

“The beauty of explosive plays means there are players that are playing hard without the ball in their hand,” Drayton said.

To continue that trend, those habits must continue to be developed during the week.

“It’s not just gonna show up,” Drayton said. “We’ve got to continue to put the work in.”