Griffin Dorsey added his first career MLS goal for the Dynamo, who were 0-8-8 during the tailspin that followed a victory over the Vancouver Whitecaps on May 22.

Michael Nelson made two saves while recording his first career MLS shutout for Houston (4-10-10, 22 points). Nelson has started the past three matches while starter Marko Maric nurses a leg injury.

Brad Stuver made four saves for Austin FC (5-14-4, 19 points), who have dropped six of their past seven matches.

Houston had a 16-15 edge in shots and placed seven on target to Austin’s two.

Dorsey set the tone for Houston with a rebound goal in the opening minute.

Picault scored his first goal in the 24th minute after Austin’s Julio Cascante was unable to intercept a long pass. The ball bounced off Cascante’s foot right to Picault and he sent a right-footer inside the right post to make it 2-0.

Picault achieved the brace in transition in the 64th minute immediately after Austin had a strong chance to get on the board. 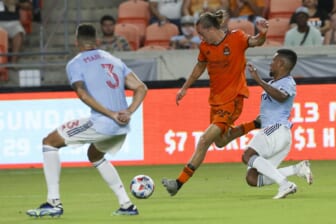 Cecilio Dominguez took a close-range right footed shot that Nelson got a hand on and the ball caromed to his left and hit the goalpost.

The Dynamo got possession and sped the other way with a lot of room to operate. Picault ended up receiving the ball and sent a right-footer into the right corner for his team-best eighth goal of the campaign.

Austin didn’t place a shot on target until the 53rd minute when Nelson thwarted the right-footed attempt by Austin Ring by using his hand to knock the ball over the net.