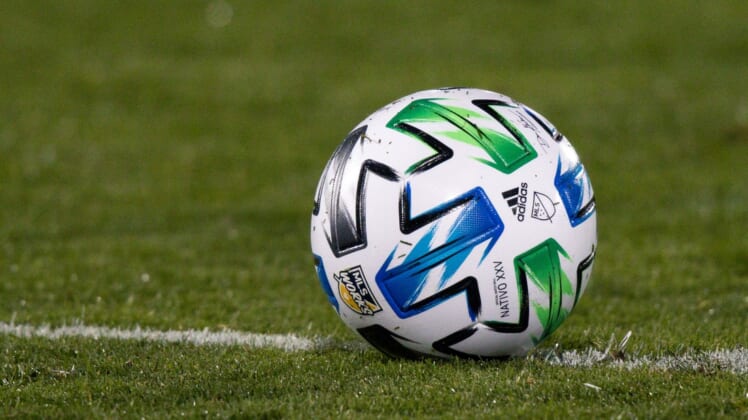 Sep 9, 2020; Commerce City, Colorado, USA; A general view of the match ball in the second half between the Colorado Rapids and the Houston Dynamo at Dick’s Sporting Goods Park. Mandatory Credit: Isaiah J. Downing-USA TODAY Sports

Memo Rodriguez scored shortly before halftime, Maximiliano Urruti added a goal in his club debut and the host Houston Dynamo defeated the San Jose Earthquakes 2-1 on Friday in the opening game of the MLS season.

Tyler Pasher added an assist in just his second career MLS appearance, and his first since 2017, having played most of his recent career in the lower tiers of pro soccer in the United States.

Paul Marie pulled a late goal back for San Jose.

San Jose right back Tommy Thompson departed after only eight minutes with an apparent injury to his right shoulder.

The Dynamo dominated the early stages and finally took the lead through Rodriguez in the 39th minute.

Joe Corona played just a speculative ball in his direction, and Rodriguez used his body to turn charging defender Florian Jungwirth and carve out an open path toward goal.

San Jose goalie JT Marcinkowski charged off his line, and Rodriguez curled a simple right-footed finish inside the far post.

It was 2-0 in the 56th minute after a simple, incisive counterattack. A Dynamo defender won an aerial challenge and knocked the ball to Pasher on the left. Pasher charged down the left, then dragged back a cross toward the penalty spot where Urruti met it for a one-time finish.

It was Urruti’s 54th career MLS goal and his first for Houston, his fifth MLS club.

Marie cut San Jose’s deficit in half in the 75th minute with a brilliant individual goal. He took Shea Salinas’ pass, cut inside from the left and unleashed a ferocious right-footed shot that curled just inside the far post from 25 yards away.