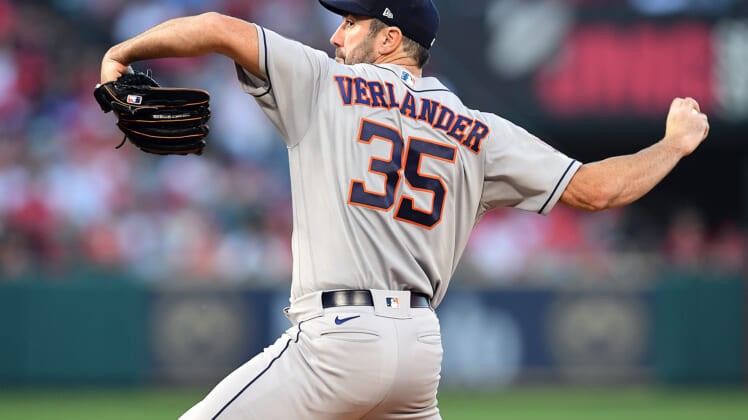 Justin Verlander went two and a half years without making consecutive regular season starts for the Houston Astros. Yet, the now 39-year-old looks as sharp as ever this season.

Verlander has dazzled in his first two starts of the 2022 MLB season, surrendering a combined one run across 13.0 innings. Of course, the right-hander isn’t going to sport an 0.69 ERA the rest of the way. That said, the Astros need Verlander to be the ace he was prior to his 2020 elbow injury to contend for the World Series.

Here’s why the Astros’ 2022 championship aspirations ride on a Verlander revival.

Houston still has a well-rounded and prosperous operation. The problem? Lance McCullers Jr. is on the 60-day injured list with a forearm injury and Houston is hitting .199 through 12 games.

Now, these negatives don’t stop the Astros from competing for the playoffs and/or eventually picking up steam. That said, they expose a degree of vulnerability and present a situation where others have to step up.

Verlander has been one of the best starting pitchers in the sport. Two starts are merely two starts, but the veteran has at least shown that the elite starter of the past is still inside him. He’s striking out hitters at a high rate, providing length, pitching efficiently and effectively deploying his four-seamer and slider.

At full force, the Astros have a top-level rotation. McCullers is a proven power pitcher. Luis Garcia and Framber Valdez have continually made strides and become top-of-the-rotation starters. Jose Urquidy is a big-game pitcher. A rejuvenated Verlander stabilizes this unit and keeps it in the upper echelon of the sport; McCullers’ absence somewhat affects their standing.

Every team needs a featured part of its attack, and the Astros’ best bet is their starting rotation.

As previously alluded to, the Astros are off to a nightmare start at the plate. Jose Altuve’s recent hamstring injury isn’t going to help that struggle, either. At the same time, there’s too much firepower and upside for this offense to rot at the bottom of the sport.

When healthy, Altuve and Alex Bregman are superb at their respective infield positions and pose an intimidating threat from the right side. Yuli Gurriel is one of the best first basemen in the sport. Despite an anemic start, Kyle Tucker has continually progressed and become one of the best outfielders in the sport.

Yordan Alvarez rakes from the left side. Jeremy Pena is off to an encouraging start as the everyday shortstop, the position Carlos Correa previously held down for seven seasons. Chas McCormick is off to a superb start, hitting .345. Aledmys Diaz offers a versatile, plug-and-play option.

Manager Dusty Baker has a handful of proven players, accompanied by a recent influx of youth. Simultaneously, the raw returns of 2022 show that this part of their roster won’t be as overwhelming as years past.

Furthermore, Altuve, Bregman and Michael Brantley have been hindered by injuries in recent memory.

Justin Verlander holds the cards for the Houston Astros

For the better part of the last seven years, the Astros have been the team to beat in the AL West and seldom challenged for the division crown. That won’t be the case this season. The Seattle Mariners are coming off a 90-win season, have a deeply talented roster and added Robbie Ray, Jesse Winker, Eugenio Suarez and Adam Frazier in the offseason.

All the while, the Texas Rangers have a new $500 million middle infield in Corey Seager and Marcus Semien and the Los Angeles Angels signed Noah Syndergaard. One also figures that the Oakland Athletics are at least competitive in the wake of their fire sale.

Houston’s offseason was headlined by getting Verlander back in the fold and signing reliever Hector Neris. The former looks worth the two-year, $50 million deal the Astros gave him, though. Furthermore, Verlander pitching like an ace helps combat the offensive firepower that the AL West will throw at the Astros this season.

Ideally, a team’s championship aspirations don’t come down to a 39-year-old who’s pitching a full MLB season for the first time in three years. But Verlander’s performance and durability loom large for the Astros. They need him.