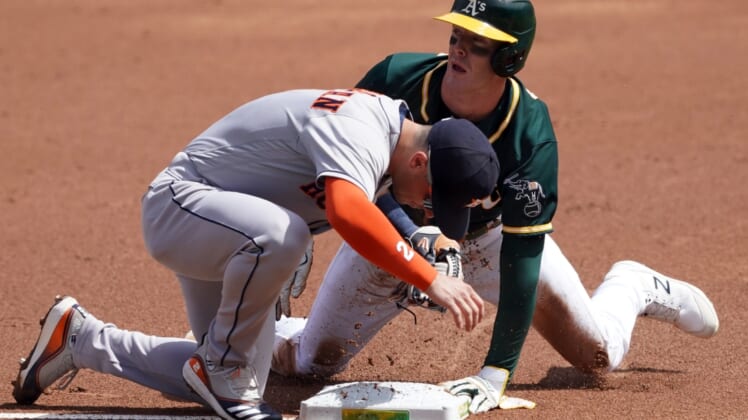 Kyle Tucker hit the 10th pitch of the game for a home run and Chas McCormick went deep for the first time in his budding career Sunday afternoon as the visiting Houston Astros completed a four-game sweep of the Oakland Athletics with a 9-2 victory.

Jason Castro celebrated a homecoming with a homer of his own, helping put a capper on the dominant season-opening series in which the Astros outscored the defending American League champs 35-8, winning each game by at least four runs.

Mark Canha had two hits and scored both runs for Oakland, which jumps from the fire into the frying pan when it hosts the reigning World Series champion Los Angeles Dodgers in a three-game interleague series starting Monday.

After the teams traded first-inning runs, the Astros took the lead for good in the second when Castro, a native of the Oakland suburb of Castro Valley, smacked a two-run homer off A’s starter Sean Manaea (0-1).

Yuli Gurriel made it 5-1 with a two-RBI double in the third before the Astros busted the game wide open in the sixth, using McCormick’s three-run homer as the finishing touch on a four-run inning.

Brandon Bielak (1-0) picked up the win in relief for the Astros, taking over from starter Jose Urquidy in the fifth and throwing 4 2/3 innings of perfect ball. He struck out four.

Urquidy was charged with two runs on four hits in 4 1/3 innings. He walked two and struck out five.

Gurriel had three hits and Alex Bregman added two for the Astros, who out-hit the A’s 11-4 in the game and 47-21 in the series.

Seven different Astros hit homers over the four games as the visitors out-homered the A’s 8-1 and collected a total of 20 extra-bases hits to the hosts’ eight.

Castro and Miles Straw scored twice in the win for Houston, which moves on to Los Angeles to face the Angels in a two-game set.

Jed Lowrie and Matt Olson drove in the Oakland runs.

The clubs will meet in a rematch Thursday through Saturday in Houston.