Houston Astros rally in 8th to stun the Seattle Mariners 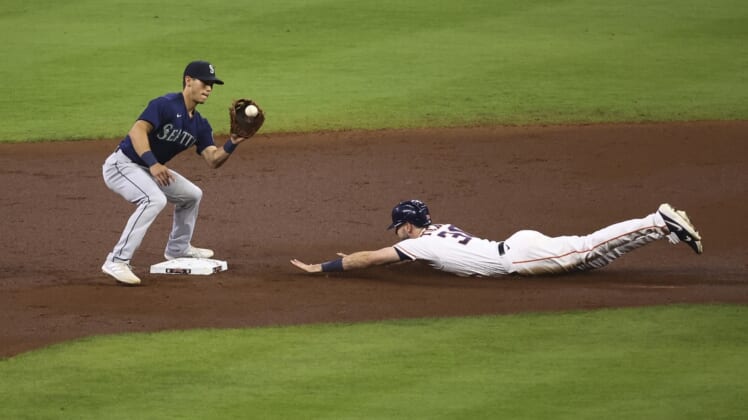 The Houston Astros mounted a stunning four-run rally in the eighth inning and claimed a series victory over the visiting Seattle Mariners with a 7-5 win on Wednesday.

The Astros batted around in the eighth while erasing a 5-3 deficit, initiating the comeback against Mariners right-hander Rafael Montero (2-1) with a one-out single from Kyle Tucker, who later scored on a throwing error by Seattle first baseman Evan White. Aledmys Diaz and Jason Castro emerged from the bench for an RBI single and bases-loaded walk, respectively, before Jose Altuve added a sacrifice fly that drove home Diaz and concluded the outburst.

The Seattle bullpen entered Wednesday with a scoreless streak of 10 2/3 innings. Ryne Stanek worked a perfect ninth for Houston, earning his first save. Joe Smith (1-1) took the win in relief.

The Mariners fashioned a surprising two-out rally in the fourth to erase a 2-1 deficit, sparked when Astros right-hander Zack Greinke issued back-to-back walks to Jose Marmolejos and Taylor Trammell. Luis Torrens, who blasted the first pitch of the third inning 426 feet and out to left-center field for his first homer of the season, struck again with a two-run double that lifted Seattle to a 3-2 advantage.

J.P Crawford, swinging on a 3-0 count, then drilled a fastball to right for a double that scored Torrens.

It was an aberrant performance and the shortest start of the season for Greinke, who entered having walked only four batters all season — none in his previous two starts. He allowed four runs on four hits and two walks while also hitting a batter over four innings. Greinke threw 85 pitches with only 46 strikes, and generated just two swings and misses on 31 fastballs.

Kyle Lewis extended the Mariners’ lead to 5-2 with his two-out, solo home run off Astros right-hander Brandon Bielak in the fifth, and Seattle right-hander Justin Dunn pitched into the sixth inning before beginning to waiver. He departed after surrendering a two-out double to Yuli Gurriel, who scored when Correa delivered an RBI single against reliever Casey Sadler.