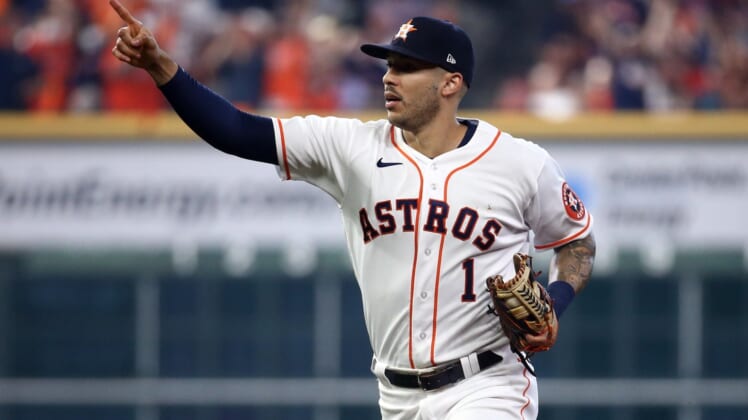 Houston Astros owner Jim Crane said Thursday that the club will attempt to retain shortstop Carlos Correa, who is slated to become a free agent following the season.

Correa reportedly turned down deals of six years for $120 million and five years, $125 million earlier this year. He hasn’t ruled out returning to the Astros.

“We’re certainly very appreciative of how he played and how he leads the team,” Crane said prior to Game 1 of the American League Division Series versus the Chicago White Sox. “He’s a great guy. We’ll definitely be in the mix as the season gets over and it’s time to address that.”

The 27-year-old Correa batted .279 with 26 homers and 92 RBIs in the regular season while being an American League All-Star for the second time in his seven-year career.

Correa was the No. 1 overall pick of the 2012 draft and has been a key player in Houston’s rise as one of the top teams in baseball. He hit five homers in the 2017 postseason — including two in the World Series — as Houston won the crown.

“Everybody loves Carlos,” Crane said. “How can you not love him? He plays hard, he’s very infectious with his leadership, and he’s a great guy, and he’s been a brand here since he got here. He’s a heck of an athlete.”

Correa could be looking to cash in big in free agency. The shortstop price market skyrocketed earlier this year when Fernando Tatis of the San Diego Padres signed a 14-year, $340 million contract followed by Francisco Lindor of the New York Mets landing a 10-year, $341 million deal.