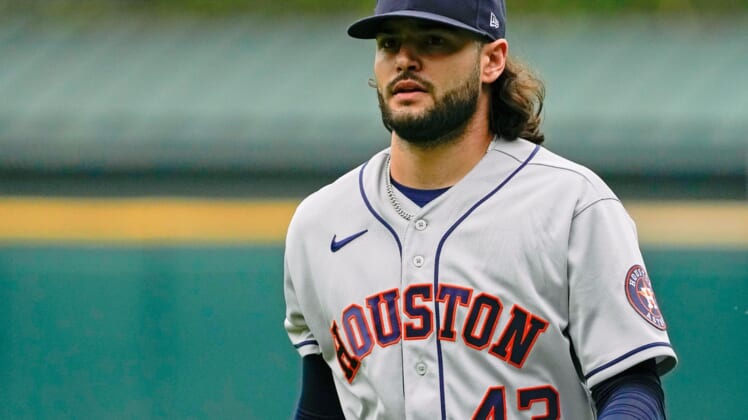 The availability of Lance McCullers Jr. for the American League Championship Series is in jeopardy as the Houston Astros right-hander deals with forearm tightness.

MLB Network reported McCullers had an MRI and isn’t believed to be dealing with a long-term injury, however he likely will be ruled out for the Astros’ upcoming series against the Boston Red Sox.

Game 1 of the best-of-seven ALCS is Friday night in Houston.

Astros manager Dusty Baker pulled McCullers prior to the start of the fifth inning of an eventual 10-1 series-clinching victory over the Chicago White Sox on Tuesday.

“I just started getting tight at the beginning of the (fourth) inning,” McCullers told reporters after the game. “I got out of it. I was fine, but you know, in a 5-1 ballgame especially, 5-1, especially with how they came back on us a few nights ago, I felt like we had the off day yesterday. So our guys were pretty rested up. And I just told them, listen, I’m not 100 percent.

“So, you know, I pitched the whole fourth inning like that. I could probably do it, but I don’t think it would be the best idea, and so they went to the pen and did a masterful job.”

Baker had no issue taking McCullers out of the game.

“At that point in time, you know, we’ve certainly got to take care of him,” Baker said. “We can’t take any chances of injury, and I only pulled him because he was hurt. That was disheartening news to me when the trainer came over and said that we had to take him out of the game. Lance is a warrior, and for him to come out of a game of that magnitude … it had to be something, and we tried to stop it before it got serious.”

McCullers, 28, allowed one run on nine hits with nine strikeouts in 10 2/3 innings over two starts against the White Sox in the AL Division Series.