Are the Houston Astros as good this year as they were in 2017? 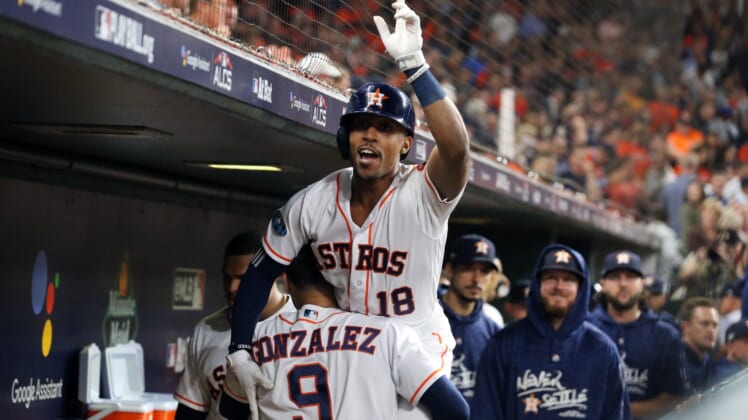 The Houston Astros were unsuccessful in getting to the World Series in 2018, but 2019 looks to be the year their fortunes turn.

The big picture: With the Astros already having two 10-game winning streaks less than halfway through the season, just how good are the Astros?

They led MLB in:

That was thanks in part to the amazing play of the Astros’ three-headed monster on the infield: Jose Altuve, Carlos Correa and Alex Bregman.

Additionally, a pitching staff headed by aces Justin Verlander and Dallas Kuechel was the 11th best in MLB, averaging a collective 4.12 ERA and a win percentage of 62 percent that was third behind only the Los Angeles Dodgers and the Cleveland Indians.

Houston, we don’t have a problem: 2018 could be considered a down year for the Astros as they were defeated in five games in the ALCS against the Boston Red Sox.

Nevertheless, the 2019 Astros are firing on all cylinders:

If the Astros are able to keep up their torrid pace into the second half of the season, they are undoubtedly the team to beat in the AL. As the Red Sox struggle in the slugfest that is the AL East, the Astros are chomping at the bit for a potential meeting against the struggling Red Sox.

Perhaps the Astros’ only real threat to take the AL pennant might be the New York Yankees. Already devastated with injury, the Yankees still somehow find themselves at the top of the AL East. Once they are fully healthy, the Yankees are the one team to watch out for.

Best in the AL West: For a lack of a better term, the Astros’ competition in the AL West is laughable. Currently, there is no other team in MLB that has as big of a lead over the next best team as the Astros.

Taking a look at the opposition:

If the AL West continues to be lackluster for the remainder of the season, that all but guarantees the Astros a berth in the playoffs. Taking into account how the last few years have gone for the Astros and the AL West, that is an almost an absolute certainty.

The bottom line: With the Astros in command of the AL West, there’s not really a competitor to worry about in their own division. The relative ease in which they are beating teams has to worry other teams in the American League and even in the National League.

Considering the lack of obvious weaknesses that the Astros are exhibiting, expect them to be the overwhelming favorite to win the World Series this year.