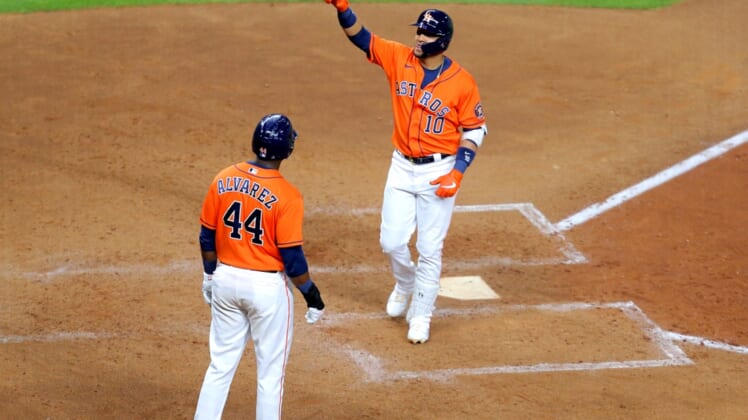 Correa and Gurriel each slugged their fifth home runs of the season in support of Urquidy (3-2), who won his third consecutive start and allowed two or fewer runs for the fifth time in seven starts. The Astros opened their season-long 10-game homestand by banging out 15 hits.

Correa erased a 1-0 deficit with his 397-foot shot off the left-field foul pole in the second inning, plating Gurriel, who opened with a single off Toronto right-hander Ross Stripling (0-2). The Astros sent nine batters to the plate and scored three runs in the inning, which ended only when Stripling got a generous called third strike against Yordan Alvarez with the bases loaded.

Gurriel homered for his third hit of the game in the fifth. It came with Alvarez on board after a single. The 392-foot line drive into the left-field seats stretched the lead to 5-2. It was Gurriel’s 12th multi-hit game of the season.

He added a single in the seventh knocked in Alex Bregman and gave him his fifth career four-hit game.

Bregman had three hits, and Alvarez and Jose Altuve had two apiece. The top five hitters in the Houston lineup finished a combined 12-for-21 with eight runs scored, three walks and seven RBIs.

The Blue Jays slugged a pair of solo homers off Urquidy. Bo Bichette smacked his club-leading eighth with one out in the first, a 392-foot blast to left-center. Danny Jansen added his second home run of the season, both in the last two games, with one out in the third to cut the deficit in half at 3-2.

Urquidy allowed a double after Jansen’s homer, but settled down and surrendered just two additional baserunners in his outing. He retired the final eight batters he faced and allowing four hits with a walk and two strikeouts on 84 pitches.

Stripling went 3 2/3 innings, allowing three runs on six hits. He walked three, struck out three, and threw a season-high 82 pitches in his fourth start of the season.