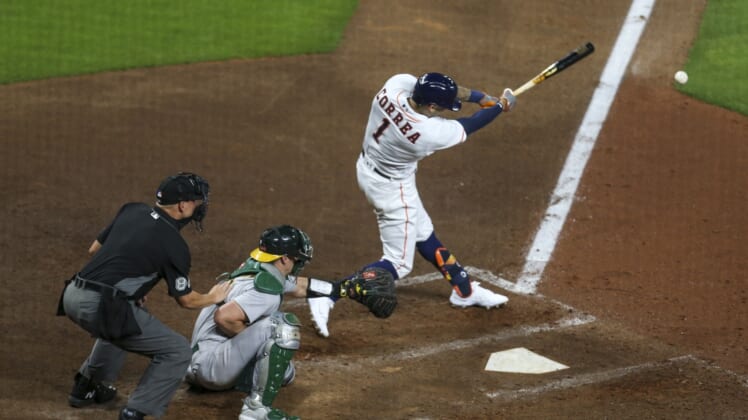 Carlos Correa and Yordan Alvarez homered and had multi-hit games as the Houston Astros bashed their way to a 6-2 victory in their home opener over the Oakland Athletics on Thursday.

Jose Altuve also went deep for the Astros, crushing a 426-foot shot to left-center field leading off the seventh inning to cap the barrage. Houston leads the majors with 15 home runs this season.

Houston has won six of seven games to open the season, and have beaten the Athletics in all five of their meetings, outscoring them 41-11.

Correa, who homered in his final at-bat Tuesday against the Los Angeles Angels, opened the scoring with an opposite-field shot to right field off Oakland left-hander Cole Irvin (0-2) leading off the second. He added an RBI single that scored Alvarez in the fourth and widened the lead to 2-0.

Alvarez, who flexed his power with an opposite-field double to left-center before scoring on Correa’s single, crushed an 0-1 slider from Irvin into the upper deck in right, estimated at 405 feet, to ignite the Astros’ three-run sixth.

Correa finished 2-for-3 with two runs and two RBIs, while Alvarez went 2-for-4. Both hit their second home runs on the season. Altuve’s was his first, and it came against Oakland right-hander Deolis Guerra, the Athletics’ third pitcher.

Irvin allowed four runs on five hits and one walk with three strikeouts over 5 1/3 innings.

Astros right-hander Cristian Javier (1-0) stranded a pair of baserunners in the fifth inning to complete his scoreless outing. Javier also stranded two runners in the third inning and two more in the fourth.

In the fifth, his called third strike against Athletics designated hitter Matt Olson on a four-seam fastball left Elvis Andrus and Mark Canha on the corners and preserved the Astros’ two-run lead.