Hottest WAGs In The MLB

I decided to take a different route with this article on the hottest WAGs in the MLB (Major League Baseball). Yes, these women are all beautiful, hot, babes. However, let’s remember crushes on certain people go further than just outer appearances.

I’ll give you the scoop on these ladies in the MLB and teach you all a lesson on how to fall in love with more than just looks. Then, when all is said and done, remind yourself that the best players in baseball get to go home to these hotties, while we live tweet the Oscars.

Hottest WAGs In The MLB

I think we can all agree Amanda McCarthy is our biggest twitter guilty pleasure. I always adore a woman who speaks her mind and isn’t afraid to drop cuss words and make fun of her husband. She always isn’t ashamed to admit when she’s hungover after a night at a Justin Timberlake concert.

Looks and silliness aside, Amanda is an admirable woman who always steps up to the plate (a little bit pun intended) when it comes to charities and fundraisers. She’s even been known to auction off dates with herself during games, and a dinner with her and her husband. (Dinners with her and her husband take place by spending candlelit hours staring at their phones, because romance.)

The model has more to offer than just her obvious looks. We adore her when she posts pictures of fan mail she receives from fans of Brandon’s across the country who tend to bring a tear to her eye.

So make sure the next glass of wine you pour, you cheers to the beautiful and funny Mrs. Amanda McCarthy.

For this she’s one of the Hottest WAGs In The MLB.

So, I may be just the tad biased simply because I adore this woman and everything she has to offer. It wasn’t until I read an article that brought tears to my eyes that I was reminded there are amazing people in the world.

“I wouldn’t have made it through the past two years without the two of them,” Scott Sizemore said. “On those days I felt like giving up, they were there with words of encouragement to push me to work harder. Brooke never let me get away with doubting myself or my ability to play the game at the highest level.”

I believe we all seek a companionship much like the one Brooke and Scott have. A supportive (and obviously beautiful) wife is what every man strives for. I don’t care who you are. They also have a beautiful daughter Layla, with a baby boy on the way. I will forever be Brooke’s number one fan.

You can read the rest of the article on Scott Sizemore here.

Are you done drooling yet? Have you ever felt like there was something in your life that was missing? An emptiness? You’re probably not following @DallasLatos on the twitter dot com then. The wife of the Red’s pitcher (who we all know her to call McMuffin) always has something that will make you press that retweet and favorite button over and over again and think “dammit, that was good.

“She even has an award to prove it. A wonderful “hashtag” trophy with her name in it with an engraving Dallas Latos #FaceofMLB 2013 Continuing to CONQUER the TWITTERVERSE.

In addition to her humorous tweets, the hottie is extremely involved in charities as well.  Being animal lovers, her and hubby Mat have helped “SNAP” (Spay and Neuter Action Project) in the past as well as other charities around the holidays. Another woman who is someone you should follow not just over twitter, but some of her advice as well. Just adore her. We know, we know, you have a crush.

The all-time hottest blonde (sometimes Brunette) WAG In The MLB. 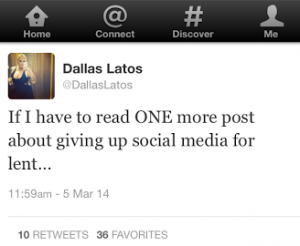 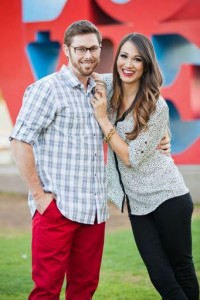 This next wife is probably the wife I had heard more people say “She’s my #1 crush.” Including myself. Kaycee Sogard has warmed the hearts of so many Oakland A’s fans it’s amazing. The recent #FaceofMLB contest over twitter reminded us all why we love Kaycee. And the love she has for her husband and their newest addition baby Saydee is just too much.

“I’m pretty sure my husband is the hottest hottie that’s ever hottied,” tweeted Kaycee.

Like, stop making us fall in love with you Kaycee! (Just kidding, don’t ever stop). Between her caring nature, and genuine love for life, you can’t help but adore the beautiful Kaycee Sogard. I can promise if you don’t adore her now, you will eventually. The green and gold love you, Kaycee.

Kaycee’s become somewhat of a feature here at Sportsnaut not just because she’s one of the Hottest Wags In The MLB, but also because she’s just so much awesome. 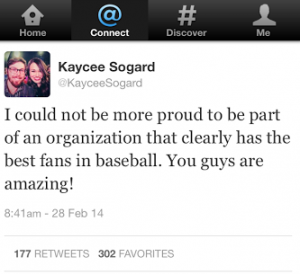 I recently became a huge fan of Brittany Ross. The reason is besides her obvious flawless looks, she was tweeting about Mission 108, a non-profit her and hubby Robbie are very passionate about. In addition, as you see in the photo, they participated in the NOH8 campaign. I recently stalked, I mean, read Brittany’s blog, and this particular post stuck in my head:

“People are funny. When I think of the world and the culture we live in I think of magic. We are under a few spells. One being that we believe we have to choose a side. A&E or Phil. Republican or Democrat. Christian or Not. Pro choice or Pro Life. Pro Obama or Anti Obama. We also believe that we need to be very very loud to be heard. Loud meaning screaming our opinions at dinner, on the news, at work, or in school. Being loud can also mean pictures on Instagram or Facebook, comments on twitter or in emails.

Loud just means IN YOUR FACE. We see it everyday and we are forced to make a choice. I tend to like people who see beyond the choices given and come up with a different answer. Thats the person I want to be. I feel like choices are like a filter. Choices filter out uninteresting, lame, boring, judgmental people out of my life so I can focus on the cool weird people with possessions like brains.”

I think we can all relate to her. So much respect for her, as well as the rest of the wives I have on this list. Hotness aside, I think I gave you many more reasons why you can add these ladies to your hottest of hotties that have ever hottied.

There you have it.