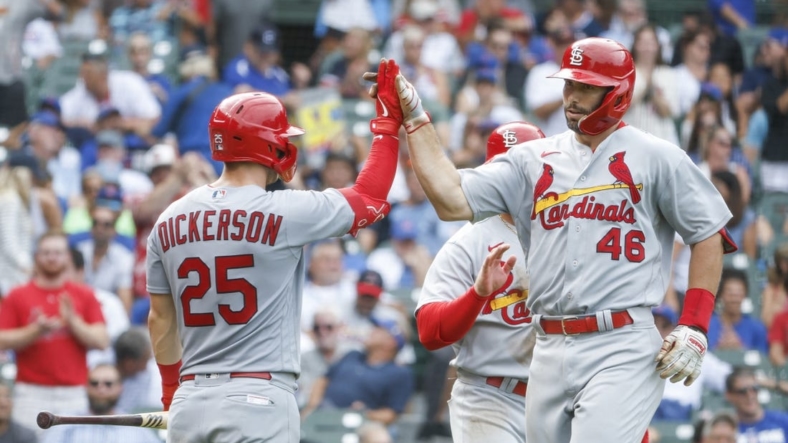 Two of baseball’s hottest teams will square off on Friday night when the St. Louis Cardinals host the Atlanta Braves.

The Braves have won 14 of 16 games since dropping four of five to the Mets this month in New York.

“I feel like we can beat you in different ways,” Braves shortstop Dansby Swanson said. “Like we can pitch and play defense and obviously we can swing it a little bit, too.”

Braves first baseman Matt Olson broke out of a 4-for-26 slump by going 3-for-5 with a grand slam in Atlanta’s 14-2 road victory over the Pittsburgh Pirates on Wednesday.

Olson has 66 extra-base hits this season, one fewer than teammate Austin Riley’s total, which is tied for the National League lead. They are trying to become the first two Braves to produce more than 80 extra-base hits in the same season.

“I don’t think it’s been the most consistent year by any means,” Olson said, according to MLB.com. “You’re finding a way to get extra-base hits. You’ve got to check-swing a couple out there every once in a while. But seriously, it’s good. There’s always room for improvement, but you take your victories.”

The Braves will open the series by starting Spencer Strider (7-4, 2.95 ERA), who has held opponents to one run in four of his last five starts.

The rookie right-hander threw six scoreless innings against the Cardinals on July 7 in a game the Braves lost 3-2 in 11 innings. Strider allowed just two hits and two walks while striking out 12.

The Cardinals have won all four starts by left-hander Jose Quintana (4-5, 3.45 ERA) since he arrived from the Pirates just before the trade deadline. However, after allowing just five runs on 12 hits in his first 17 innings with the team, Quintana lasted only 2 2/3 innings in his latest start, against Arizona on Sunday.

He will seek a bounce-back performance Friday after allowing four runs (two earned) on seven hits and three walks as the Cardinals won 6-4 in Phoenix.

Quintana lost the last time he faced the Braves, when he yielded four runs in five innings on June 12 while still with the Pirates. He is 2-2 with an 8.37 ERA in five career starts against Atlanta.

The Cardinals expect to get closer Ryan Helsley off paternity leave in time for the Friday game. He has been away from the team for the past week after his wife gave birth to their first child.

Cardinals third baseman Nolan Arenado left the team before the Thursday game to take paternity leave. First baseman Paul Goldschmidt returned after a day off to go 3-for-4 with two homers, five RBIs and three runs to pick up Arenado’s slack and then some.

“We have a deep roster,” Goldschmidt told Bally Sports Midwest. “That’s why Oli has been able to rotate guys in and out. It’s going to take a team effort. Hopefully we can keep it going.”