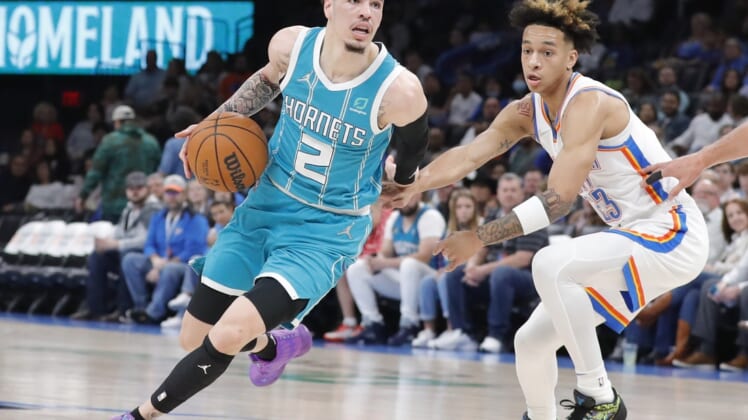 Terry Rozier scored 30 points on 11 of 17 shooting to lift the Charlotte Hornets to a 134-116 road win over the Oklahoma City Thunder on Monday.

The Hornets have won back-to-back games and four of their last six. The Thunder have lost six consecutive games and 10 consecutive home games.

During its losing streak, Oklahoma City has allowed an average of more than 131.2 points per game.

Charlotte turned the ball over a season-low five times and scored 27 points off of the Thunder’s 18 rebounds.

The Hornets shot 53.3 percent from the field and 57.1 percent from behind the 3-point line. Charlotte hit 20 shots from beyond the arc, including five each from Miles Bridges and LaMelo Ball.

The Hornets hit their first seven shots over the first five minutes of the game, with eight points by Rozier helping Charlotte to a five-point lead.

But then the Thunder, who scored 41 points in the first quarter, went on a 33-10 run that put Oklahoma City up by 18 points by early in the second quarter.

Oklahoma City shot 61.5 percent from the floor in the first.

But after falling behind by 18, the Hornets came on defensively and taking advantage to go on a 21-5 run.

Charlotte tied it twice late in the second quarter, then finally grabbed the lead on Rozier’s 3-pointer in the final minute.

The Hornets scored 13 points off of Oklahoma City’s seven second-quarter turnovers while only giving the ball up once themselves.

After going just 2 of 8 from the floor in the first half, LaMelo Ball came on strong in the third. He scored 14 of his 21 points in just more than five minutes to start the second half, hitting four 3-pointers.

Bridges finished with 27 points for Charlotte.

Shai Gilgeous-Alexander led the Thunder with 32 points, scoring 30 or more for the eighth time in 10 games since the All-Star break.