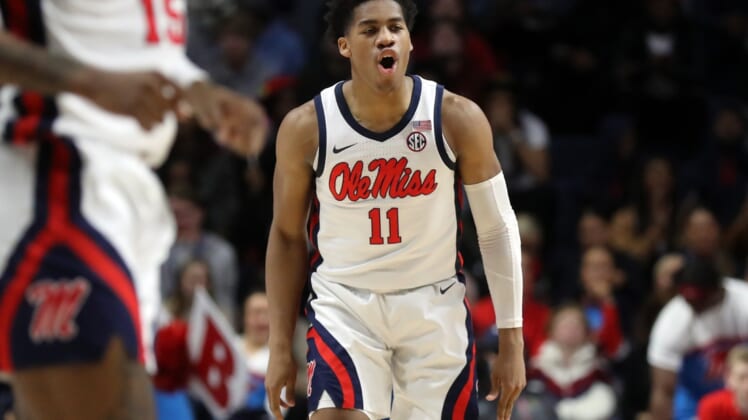 Murrell shot 10 of 11 from the floor, including 5 of 5 on 3-pointers, and made all six of his free throws. Nysier Brooks added 15 points, 16 rebounds and five blocked shots, Daeshun Ruffin finished with 17 points and eight assists, and Jaemyn Brakefield had 15 points for the Rebels (9-5, 1-1).

Iverson Molinar and Garrison Brooks scored 16 points each and D.J. Jeffries added 13 to lead the Bulldogs (10-4, 1-1), who saw their four-game winning streak end as they played for the first time in 10 days. Their game at Missouri that was scheduled for Wednesday was postponed due to COVID-19 issues within the Tigers program.

Nysier Brooks scored the Rebels’ first six points of the second half and Brakefield added a 3-pointer as Ole Miss extended their 14-point halftime lead to 59-39.

Garrison Brooks then scored eight of the Bulldogs’ points in a 12-3 run, the last two on a dunk, as the Bulldogs pulled with 61-51.

Murrell scored the next four points, but Mississippi State later closed the deficit to 69-59 on a layup by Rocket Watts.

With Ole Miss up by 12, Jeffries scored five straight Bulldogs points to get them within 73-66 with 4:07 to play.

MSU led 5-2 before Ruffin and Brakefield each made a 3-pointer as Ole Miss scored eight straight points.

Garrison Brooks’ basket ended the run, but Murrell made a 3-pointer to start a 7-0 run that gave the Rebels a 17-7 lead.

Shakeel Moore scored the final five points of a 12-2 run that pulled the Bulldogs even at 19.

Ole Miss scored the next six points before Moore and Molinar made layups to help Mississippi State get within 27-23.

Ruffin and Murrell each made a 3-pointer as the Rebels opened a 35-25 lead.

Garrison Brooks made a jumper, but Tye Fagan later made a 3-pointer, and Murrell made treys in the final 1:09 of the half, which ended with Ole Miss up 50-36.