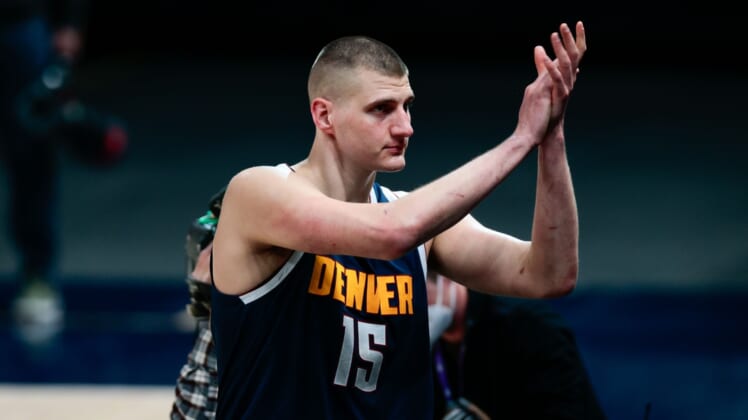 The streaking Nuggets will seek their sixth consecutive win on Tuesday when they welcome the Detroit Pistons to Ball Arena in Denver.

The Nuggets scored a 119-109 win on Sunday over Orlando for their fifth straight. Playing against his former team, new addition Aaron Gordon recorded personal highs of 24 points and seven rebounds in his four games since joining the Denver rotation.

Gordon was acquired in a trade last month for R.J. Hampton, Gary Harris and a 2025 first-round draft pick.

Nuggets coach Michael Malone has used a three-big man starting lineup with 6-foot-8 Gordon and 6-10 Porter at forwards, and the 6-11, Most Valuable Player candidate Jokic at center.

Three of the four games with Gordon in the starting lineup have resulted in Denver rebounding advantages of 49-31 against Atlanta on March 28; 51-34 at Philadelphia on March 30; and 54-36 Sunday vs. Orlando.

Denver’s current winning streak is its second of five games in the past 17. The Nuggets are 14-3 in that stretch.

The situation is much different for Detroit, which has not won more than two consecutive games at any point on the season. The Pistons are in last place in the Eastern Conference, but opened their current, five-game road swing through the Western Conference with a 132-108 rout of Oklahoma City on Monday night.

Jerami Grant led a balanced scoring effort. With 21 points, he was one of seven Pistons to score in double-figures, and one of 11 Detroit players to record at least eight points.

Josh Jackson scored 14 points, Sekou Doumbouya scored a season-high 14 points in his return from a weeklong absence, and Hamidou Diallo scored in double-figures for a fourth consecutive game with 11 points.

Diallo, acquired from Oklahoma City in a trade last month, is averaging 13.8 points per game in his five outings with the Pistons.

Among Detroit’s many contributors on Monday, Killian Hayes came on in reserve with nine points and turned heads with his seven assists.

Hayes last played on Jan. 4 before Saturday, when he went scoreless in a 125-81 blowout loss to New York. The lopsided defeat “rubbed everyone the wrong way,” Isaiah Stewart said in his postgame press conference.

Denver scored 133 points against Cleveland on Feb. 10, but haven’t hit that figure since. Still, the Nuggets rank in the NBA’s top four in points per game at 115.3.

Jokic is central to Denver’s offensive output, gaining steam for his MVP candidacy with averages of 26.3 points and 8.6 assists per game. Jokic is also averaging 11 rebounds per game, all team highs.