Hot Nets have to contend with hotter Grizzlies 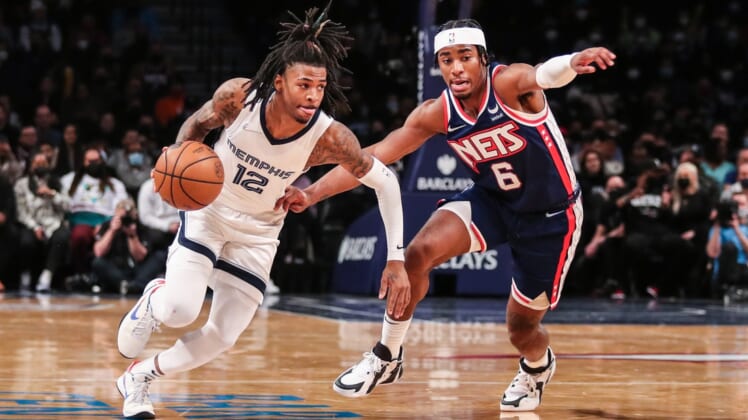 No matter who is available, Kevin Durant is doing everything he can to lift the Brooklyn Nets out of a play-in spot in the Eastern Conference.

Brooklyn is 6-1 following a 3-17 skid from Jan. 23-March 6. The only loss in their last seven games was last Wednesday’s two-point setback to the visiting Dallas Mavericks when the Nets blew a 14-point lead and lost on a Spencer Dinwiddie buzzer-beating 3-pointer.

Durant is averaging 30.8 points, 7.3 assists, 6.6 rebounds on 55.1 percent shooting — including 41.5 percent from 3-point range — in nine games since his return from a sprained medial collateral ligament in his left knee. He missed 21 games.

On Monday, Durant helped the Nets to a 114-108 win over the visiting Utah Jazz when he scored 15 of his 37 points in the third quarter. It marked the first time Durant scored at least 35 points in consecutive games this season and it was his fifth 30-point game since returning.

The Nets got within two games of the seventh-place Toronto Raptors and three of sixth-place Cleveland.

Durant played with his fifth different starting lineup since returning March 3 and Brooklyn’s 40th overall. Andre Drummond sat out the game with an illness and Nic Claxton scored 15 points in his place. Bruce Brown added a season-high 22 but the Nets lost Seth Curry to a sore left ankle in the second quarter.

“I just think we’re rallying around each other,” Durant said. “We’re making big plays. We’re just doing it together more than anything, just a collective effort.”

While Drummond is expected to return, Curry could sit again. He missed three games due to the same injury before scoring 27 in Friday’s comeback win over the Portland Trail Blazers.

Durant will also have Kyrie Irving back, given the road game.

While Brooklyn is on a two-week hot streak, the Grizzlies have been rolling for most of the past three-plus months.

Memphis has scored at least 100 points in 23 straight games and is seeking a 15th win in 20 games after ending a four-game trip with a 122-98 rout of the Houston Rockets on Sunday.

Ja Morant rested his sore knee as the Grizzlies improved to 14-2 in games he has missed. Morant scored 29 points in his last appearance Friday against the Atlanta Hawks and is averaging 27.4 points this month after averaging 33 points in February.

The Grizzlies placed six in double figures against Houston and hit 16 3-pointers. Desmond Bane led the Grizzlies with 24 points and he’s averaging 20.4 points this month. Dillon Brooks added 20 in his fourth game back from an ankle injury.

“We’ve just got a great team,” Memphis coach Taylor Jenkins said. “They uplift each other. They rise up when someone’s out and they know we’ve got a job to do out there and that’s to compete to our level.”