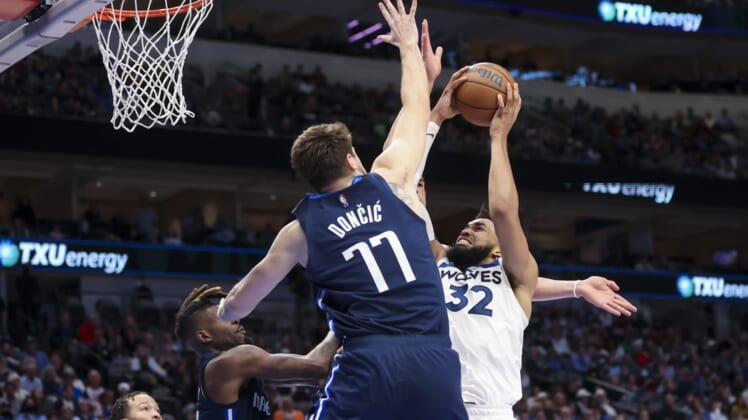 The Dallas Mavericks will aim to defeat the Minnesota Timberwolves for the second time in five days on Friday when the teams reconvene in Minneapolis.

Dallas has won 16 of its past 21 games to tie with the fourth-place Jazz. Utah holds the tiebreaker for home-court advantage in the first round of the Western Conference playoffs. The Mavericks host the Jazz on Sunday.

“No, we’re not scoreboard watching too early. We’ve got to take care of ourselves. If we can do that, we’ll accomplish one goal, and that’s to make it to the playoffs,” Dallas coach Jason Kidd said. “We can’t dictate who we’re going to play. We’ve got to worry about ourselves.”

Against the Rockets, Jalen Brunson scored 16 of his 28 points in the third quarter for Dallas, which outscored Houston by a 58-38 margin in the second half. Brunson’s final output accounted for his highest point total since scoring 28 in the Mavericks’ 114-102 win over Minnesota on Dec. 21.

Spencer Dinwiddie finished with 26 points on Wednesday while making the start in place of All-Star Luka Doncic (rest), who averages team-leading totals in points (27.9), rebounds (9.1), assists (8.6) and steals (1.2).

“I think me and Spencer have been comfortable since he got here,” Brunson said of playing with Dinwiddie, who is averaging 18.2 points, 4.2 assists and 3.5 rebounds in 15 games (seven starts) since being acquired from Washington on Feb. 10.

“It’s a credit to him for being a great teammate coming in here and just wanting to win.”

Davis Bertans, who was acquired along with Dinwiddie in the trade-deadline deal for Kristaps Porzingis, sat out his second consecutive contest Wednesday with right knee soreness.

While Dallas benefited from a second-half surge on Wednesday, Minnesota found itself on the wrong end of one in its 125-116 setback to the Phoenix Suns. The Timberwolves were outscored 74-52 over the final 24 minutes to see their 13-point halftime lead go by the boards.

“We’re not executing and our defense (is) just getting destroyed. I think we got to make adjustments,” said Anthony Edwards, who finished with a team-high 19 points. “I just think when they adjust, we got to adjust, like they did in the fourth.”

“I thought for a large part of the game, we played well. We did a lot of things we talked about,” Timberwolves coach Chris Finch said, “but we got to learn to play all the way through against these types of teams.”

Karl-Anthony Towns added 15 points, albeit just three after halftime. Towns averages team-leading totals in points (24.7) and rebounds (9.9) on the season, and he pretty much hit those marks in three meetings with Dallas (24.0, 9.7).

Each team has won on its home court in the season series.