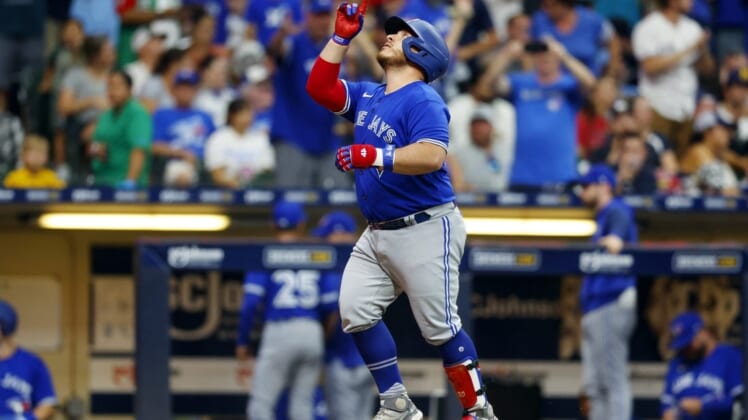 Alejandro Kirk had four hits and Alek Manoah surrendered two runs across 6 2/3 innings as the visiting Toronto Blue Jays defeated the Milwaukee Brewers 9-4 on Thursday night to begin the back half of their six-game road trip.

Kirk went deep and scored twice and has now posted back-to-back multi-hit games while going 7-for-14 (.500) on the road trip. Manoah (9-2) scattered five hits, walked three and fanned six to pick up his fifth win across his last seven outings.

Brewers starter Adrian Houser (4-8) managed to settle down and went on to last six innings. He allowed five runs on nine hits while walking one and striking out three.

Milwaukee looked poised to chip away at the deficit in the third after Tyrone Taylor and Christian Yelich walked, and Willy Adames reached on an error to load the bases. However, Manoah got Rowdy Tellez to ground out to escape the jam.

Yelich later brought Jace Peterson home in the fifth on a fielder’s choice to finally get the Brewers on the board.

Trevor Kelley took over for Houser in the seventh, and Cavan Biggio greeted him with a solo home run, his second of the season.

Two outs later, Vladimir Guerrero Jr. singled and Kirk followed with his ninth homer of the season to give the Blue Jays a seven-run advantage.

Milwaukee got a run back in the bottom half of the inning, as Taylor sent a solo shot over the left-center field wall.

Taylor was one of six Brewers to record a hit, as Yelich, Peterson, Jonathan Davis and Andrew McCutchen each added singles and Omar Narvaez had a double.

Blue Jays relievers Matt Gage, Jeremy Beasley and Adam Cimber put the finishing touches on the victory, although Milwaukee did score a pair of runs in the ninth.