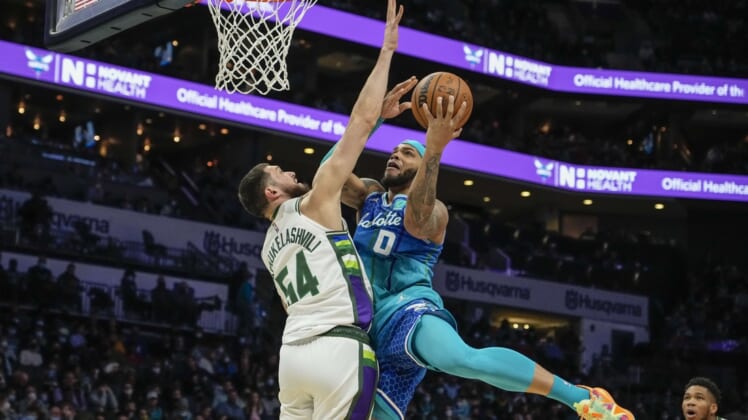 Terry Rozier hit six 3-point shots on the way to 28 points as the host Charlotte Hornets held off the Milwaukee Bucks 114-106 on Saturday night.

Giannis Antetokounmpo racked up 43 points for the Bucks, with 18 of those coming on free throws. He was 11-for-20 from the field.

Khris Middleton’s 27 points and Bobby Portis’ 19 were also a boost for Milwaukee, while Wesley Matthews had all his nine points via three first-half 3-pointers.

The Bucks, playing again under acting coach Darvin Ham as Mike Budenholzer is out because of COVID protocols, were fresh off Friday night’s convincing victory at Brooklyn.

Ball scored six points in the first 4 1/2 minutes of the third quarter as the Hornets stretched their lead to 65-52.

Milwaukee didn’t show signs of producing a comeback. The Bucks managed just four points in the first three minutes of the fourth quarter.

By the time Charlotte’s PJ Washington connected on a 3-pointer, it was 104-89 with 5:18 to play. Antetokounmpo scored the next four points on free throws, but the Bucks stalled with a turnover when they had a chance to further trim the deficit.

Milwaukee’s 24-for-26 shooting on free throws allowed it to stay within range.

The Bucks managed only 12 points in the second quarter. They shot 30.6 percent from the field in the opening half.

Charlotte’s reserves combined to outscore Milwaukee’s backups by 15-2 in the first half.

The teams meet again Monday night in the same arena.