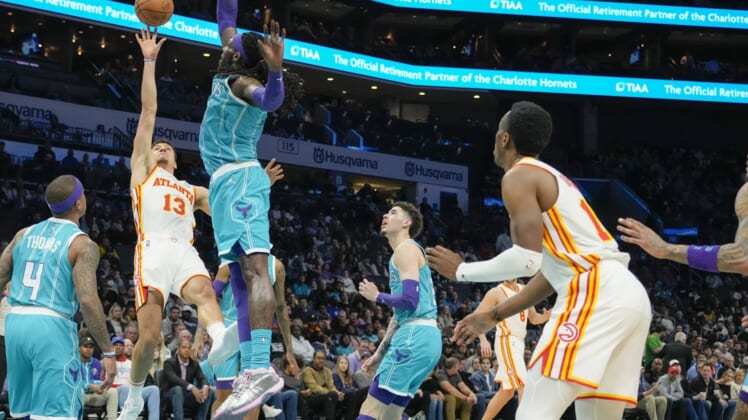 P.J. Washington scored 13 of his 16 points in the final 4 1/2 minutes, and the Charlotte Hornets pulled away to defeat the visiting Atlanta Hawks 116-106 in a key Eastern Conference game Wednesday night.

LaMelo Ball led the Hornets with 21 points and 11 assists, capped by a long 3-pointer in the final minute. Montrezl Harrell had 20 points and Miles Bridges and Terry Rozier each scored 18 points for Charlotte. Mason Plumlee chipped in with 12 points and 10 rebounds.

Trae Young, Atlanta’s star guard, was held to a season-low nine points on 3-for-12 shooting from the field. He had scored at least 13 points in every game this season and averaged more than 28 points per game. Young was 0-for-5 with two free throws in the first half.

De’Andre Hunter scored 21 points, Clint Capela finished with 17 and Kevin Huerter had 16 for the Hawks, who made 13 of their 37 attempts from 3-point range. Young was 0-for-6 on 3-pointers.

Charlotte has its first three-game winning streak in nearly two months after winning the opener of a five-game homestand. The Hornets (35-35) and Hawks (34-35) are ninth and 10th in the Eastern Conference as they battle to advance to the playoffs.

The score was tied at 85-85 after three quarters. The Hornets were without a fourth-quarter turnover, while the Hawks shot 25 percent on 3-pointers in the last quarter.

Washington began his late-game surge with a go-ahead basket as the Hornets went up 99-97 with 4:20 remaining. That snapped a scoring drought of more than three minutes for Charlotte.

Atlanta controlled play for most of the first half and led 67-62 at intermission despite 11 points by Harrell in the second quarter.