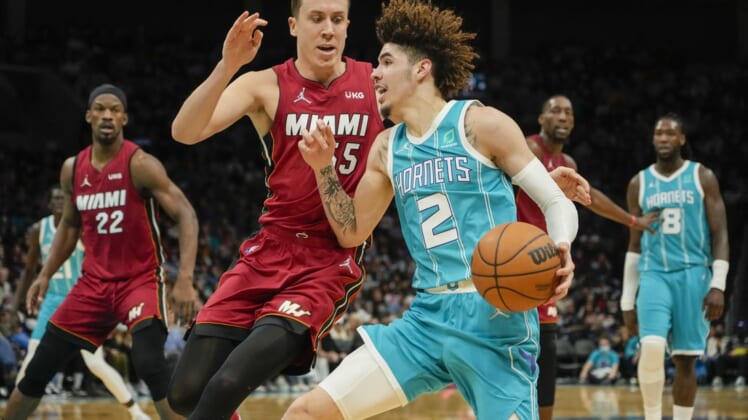 Perhaps the return of Gordon Hayward will make a difference for the visiting Charlotte Hornets, who on Tuesday night will try to avoid a four-game sweep of their season series against the Miami Heat.

Miami (51-28) is on a four-game winning streak and leads the Eastern Conference. Charlotte (40-38) currently holds the No. 9 spot and has clinched at least a play-in berth.

This season, though, Hayward has missed 29 games due to injuries. In two games against Miami this season, he has been held to an 11.5 scoring average.

He lasted less than seven minutes on Feb. 7 against the Toronto Raptors before leaving with an ankle injury, and it wasn’t until this past Saturday that he was able to return in a 144-114 loss to the Philadelphia 76ers.

Hayward posted five points, four assists and three rebounds in nearly 17 minutes as a reserve in that game, and Hornets coach James Borrego indicated he will be cautious with Hayward going forward.

“He looked comfortable, but it’s going to take a minute,” Borrego said. “I didn’t see any hesitation or reservation from him, and that’s a positive.”

Meanwhile, Miami is without coach Erik Spoelstra due to the NBA’s health and safety protocol.

“We’re trying to make the best decisions for the players and the team going forward,” Quinn said.

Even so, the Heat still had enough firepower as Max Strus scored a team-high 23 points on 7-of-9 3-point shooting, and Kyle Lowry had a double-double with 16 points and a game-high 10 assists.

In addition, Heat guard Tyler Herro nearly had a triple-double with 18 points, nine rebounds and eight assists, and fellow reserve Victor Oladipo — plagued by injuries the past three years — had a season-high 21 points on 6-of-9 3-point shooting.

“True professional,” Lowry said of Oladipo. “He hasn’t played in a couple of games. He has been out of the rotation. But I’m so proud of Vic. He found a way to impact the game.”

But Quinn had special praise for Lowry, who is averaging 13.4 points and a team-high 7.6 assists.

“Kyle imparts his wisdom,” Quinn said. “He brings his basketball IQ, and that’s what makes Kyle who he is as our point guard.”