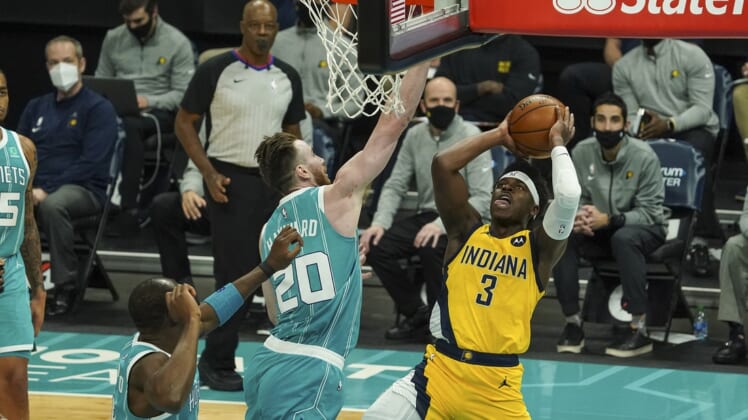 Terry Rozier and P.J. Washington each scored 19 points and the Charlotte Hornets recovered in time to defeat the visiting Indiana Pacers 108-105 on Friday night in Charlotte, N.C.

The outcome reversed a loss to the Pacers two nights earlier.

Three Pacers reached the 20-point mark, with Domantas Sabonis with 22 points and 11 rebounds, Malcolm Brogdon with 21 points and Myles Turner with 20 points. Sabonis had a triple-double in Wednesday night’s game and was four assists shy of another.

Rozier, who had three 3-pointers in the first half, hit a 3 with 1:10 remaining to give the Hornets the lead. Graham followed with a 3 on the team’s next possession, stretching the lead with 52 seconds to play.

Brogdon posted a layup on Indiana’s ensuing possession. From there, the Pacers got only one more shot from the field.

Leading 108-105, the Hornets held possession following a replay review with less than two seconds to play.

Doug McDermott had a hot start for the Pacers, but he suffered an injured thumb and lower back. He finished with just 11 points.

The Hornets, who lost six of their previous seven games, were 16 of 37 on 3-point attempts. Rozier made five of those and Graham had four, offsetting Ball’s 0-for-6 mark on 3-pointers.

Overall, Charlotte was 50.6 percent from the field.

The Pacers were only 11 of 35 from long range despite six different players hitting at least one 3.

The Hornets led 64-60 at halftime and extended the lead with a couple of 3-pointers from Washington early on the second half.